Meat Puppets: Back From the Lake of Fire, the "New" Meat Puppets Feel the Love

"I had a guy yelling at me during a gig in Dallas recently," says Meat Puppets mastermind Curt Kirkwood. "He was saying, "Where's the real Meat Puppets?' I told him to go get his money back. I felt bad for him. He was confused. The Meat Puppets were right in front of him. Anybody that doesn't like it can take a flying fuck."

For proof, procure yourself a copy of the band's You Love Me EP, a promo-only, seven-song introduction to the new band. With a limited number sent to fans via the band's Web site (http://www.meatpuppets.com), You Love Me represents a giant leap in Meat Puppet evolution. Kirkwood may be the puppet master, but the EP proves the Meat Puppets are now more than ever a team effort. In fact, most of the disc's compositions are collaborations between Kirkwood and his young protégés.

"We write a lot and we rehearse a lot," Kirkwood says. "Not to be good, but just out of the joy of having a new band."

After a four-year dry spell, Kirkwood admits the real joy will be finally having an album in stores. In the final stages of editing down a song selection to the as-yet-untitled album, Kirkwood and company will likely wind up a collection of songs recorded at the ARC, Pedernales, and New York. Kirkwood says the result is the typical Meat Puppets melting pot: college radio-oriented rockers, hardcore country, psychedelia, and "some Beach Boys-type crap."

London, Kirkwood's label affiliation for nearly a decade, has plans for a May roll-out to college radio and to support a summer tour with a full-blown campaign. Kirkwood is clearly excited about the album itself, but says he's far more interested in continuing down the harder, heavy path You Love Me treads than merely cashing in with serious commercial success.

"Already -- live -- anybody with any questions has had them resolved pretty quickly," says Kirkwood. "And I don't want to sound like I'm complaining, but ditching the band and putting together a new one from scratch has certainly taken its toll. To now have a band going on and a record in the can feels great. I've basically been in the closet writing for four years. That's a long time -- long enough that you're glad when anything goes well." 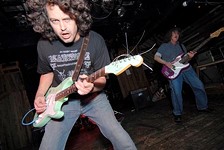