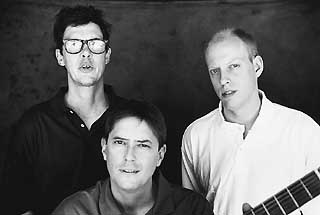 Butthole Surfers: Disney and the Surfers Shoot for Post-"Pepper" Fantasia

Last Friday, Paul Leary finally began downloading into his home studio the original digital mixes of After the Astronaut, the aborted Butthole Surfers album Capitol Records was originally planning to release back in May 1998. It's the band's first real progress after nearly two years of legal entanglements. After parting ways with both Capitol and longtime manager Tom Bunch in mid-1998, the Butthole Surfers finalized a new management/record deal with Dave Kaplan of Surf Dog/Hollywood last year, so with the Astronaut masters back, Leary says the long-awaited follow-up to 1997's Electriclarryland, featuring reworked material from the Astronaut sessions and new material, should be ready by summer.

"I'm not sure what I'm going to do, but I'm going to uncork a few bottles of wine and see what comes out of the next few weeks," says Leary. "I've got a great setup, drastically better digital editing equipment than I did two years ago, and a great view of a couple of big oak trees and a bus stop with college girls. It's gonna be a beautiful thing."

To the surprise of longtime Butthole watchers, when Surfdog told the band they didn't believe After the Astronaut had enough hits to release outright, the band agreed.

"I always wanted a hit, and I'm sure we've all wanted hits," explains Leary. "This time I'd like to have three. -- When the Butthole Surfers make records, a lot of things will get tossed around and then something will really tickle somebody or everybody. That tickle kind of takes you in a different direction. The very early stages of "Pepper" seemed to tickle me like a money song. I never thought of a Butthole Surfer song as a money song, so it was fun. If it had tickled me as some kind of "I want to blow your dad" kind of song, it would have gone there. But it sounded like money to me and I'm sure somebody made some money from it."

Given what happened last time around, are Leary and his cohorts Gibby Haynes and King Coffey absolutely sure they want another "hit"?

"Well, we haven't died," cackles Leary. "I want to see this record do well. I never wanted to let Capitol Records or anybody else kick our asses into submission. I'd rather go out on our own terms. To that extent, we're pretty determined to make good with this and feel compelled to teach people lessons. We'll probably teach ourselves a few unwelcome lessons in the process, but we've always been willing to take that chance."