Austin Music goes to Amsterdam, and the Spankers come back from there; more albums don't come out, and more bad club news 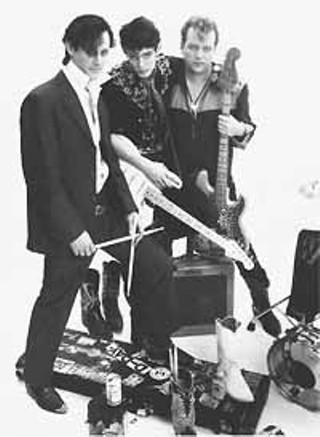 Alex Napier (r) with Charlie Sexton draped on him.

Amsterdamned If You Do ...

With 2000 just around the corner from the apocalypse, things are already kicking into high gear at South by Southwest World Headquarters, and next week you can expect to read here a list of the first acts to confirm as showcase artists, with labels from Peek-a-Boo, Estrus, and Man's Ruin to Koch, New West, and Shanachie passing on the poop as to who they're sending. This week, on the other hand, there's an impressive list of acts who won't be playing SXSW this year -- or at least those who may be hard-pressed to do so -- because they're already planning their trip to a huge Americana festival outside of Amsterdam. That extravaganza, in Utrecht, is scheduled for March 18, the Saturday of the Conference, and a number of local big names have signed on, meaning that most of them will be leaving that Thursday and missing the rest of SXSW weekend. Among those expected to play the lucrative Holland festival are Kelly Willis, Bruce Robison, Terry Allen, Guy Clark, and Terri Hendrix & Lloyd Maines, with Joe Ely said to be currently tugged at from both sides between the joys of Amsterdam and the big push Rounder Records hopes to give his next album at SXSW. Davis McLarty, who manages several of the acts planning to make the trip overseas, says organizers had no idea when they picked that date that they would be causing the Austin coterie to have to make such a difficult decision, but that the money and adventure being offered by the Amsterdam fest makes it very hard for a working musician to turn down. For reference, you might recall the government-subsidized Crossing Border Festival held there in October, where Monroe Mustang were flown in and the Damnations played, both receiving the red carpet treatment. As far as choosing between the money and the exposure, SXSW's Brent Grulke notes, "It sucks for the bands that with maybe five events like this in a year, two would come up in the same weekend." Though he's heard little about the competing fest, Grulke says he's well aware that it will impact SXSW, but he's hoping some of the acts can play Wednesday instead. Willis may do just that -- manager McLarty has already been in contact with Margaret Moser regarding a possible appearance at that night's Austin Music Awards show. Willis' latest album, by the way, has been in the Waterloo Top 10 since it came out in February, and Soundscan marks it at 78,000 copies sold nationally. Folks looking for Willis' out-of-print CDs and compilation work may be in luck as word has it that MCA is considering releasing a compilation culled from her three albums for the label, along with the song she did in Bob Roberts. That'll be good stuff for people following her trail on the tour she's recently picked up opening for George Jones.

The Asylum Street Spankers have already done their time in Amsterdam, and the trip (no pun intended) made enough of an impression on them that they've recorded a new album titled Spanker Madness. Chronicling their "high times" on a recent tour there, Madness looks to be released in March (natch, see above) on their own new Spank A Lot label. Returning members for the disc and for their end-of-millennium shows in Austin (Scottish Rite Theatre, Dec. 29), Houston, and New Orleans are former Spankers Guy Forsyth and Stanley Smith, but gone from the lineup now are Pops Bayless and Mysterious John, both of whom, says eternal Spanker Wammo, had finally had enough of the band's grueling tour schedule. In addition, it appears that lovely vocalist Christina Marrs will be producing a new li'l Spanker, courtesy of the Manager Currently Known as John Riedie. Wammo's solo Firesign Theatre-inspired Faster than the Speed of Suck album, planned for his ill-fated Mercury/Mouth Almighty deal, remains unreleased, despite the fact that both his band and Suck's producer Brian Beattie have their own labels. Wammo says that Spank A Lot is still "kind of an experiment" supported by a loan taken out by the band, but that he may take what he's learned from the Spankers' experiences with local labels and "wait 'til Spank A Lot exploits a few artists, and then use that money to release and promote my album."

Beattie's label, New Improved Music, ironically enough, came about because of troubles with another indie label. The current issue of Seattle's The Rocket reports that even after Beattie issued a limited edition of Daniel Johnston's Rejected/Unknown, just to end literally years of delays as Johnston and Beattie waited for first Atlantic, then Tim/Kerr Records to release it, Tim/Kerr owner Thor Lindsay has declined to return the master tapes. Beattie's version was mastered from a DAT copy, and apparently so will the internationally released version on Which Records. Johnston says he finally signed a new contract with that label, though The Rocket reports that the album is "still listed as a Tim/Kerr release -- something Lindsay seems bizarrely proud of." Amazingly, Johnston will probably have another album out with his new band Danny & the Nightmares before the Which release makes it to record shops. Johnston has also gotten tired of waiting on the unknown status of Rejected and has recorded and pressed up a limited edition 15-song CD with his new band, mostly comprised of his neighbors in Waller, Texas. The artwork for that won't be ready in time for Johnston's appearance at Sound Exchange and Emo's tonight (Thursday, Dec 16), but I'm betting he'll still beat the Which release of Rejected, as he admits he's still not been given a release date for that oft-delayed album.

Remember bassist Alex Napier? He was long a stalwart of the Austin blues scene, having been one of the owners of the Rolling Hills club that became Soap Creek. He went on to play in Paul Ray & the Cobras for many years, including the SRV ones, and after that, gigged around as one of the Eager Beaver Boys with Charlie Sexton in the Eighties. He even took "Best Bassist" in a late-Eighties Chronicle Music Poll; too bad this was before the days of the MTV Fashion Awards, or as seen in this photo, he'd no doubt have more trophies on his mantle. So where is he now? Earlier this decade he starting going to both South America and Spain working clubs, and has been living in Barcelona for the last couple of years. If you miss the guy, or just missed previous chances to see him play, the equally worldly Thierry LeCoz tells me that Napier is paying a visit to his old stomping grounds and that both of them will be playing Jovita's this Sunday from 6-8pm. LeCoz says to expect a "Christmas party happy-fun gig with special guests," and I don't doubt him for a minute... Another party happy-fun gig is set for this Saturday, but I can't tell you where. However, if you attend the Meat Purveyors (soon to be R.I.P.) and Split Lip Rayfield gig tonight at Stubb's, the bands will be announcing where most or all of the members of both will reconvene for a little extra jollity later in the weekend... The December 4 Billboard reports that Fastball has a track on the Supersuckers compilation album supporting alleged Satanic cult members, the West Memphis Three. (Since the 'ball boys also had a track on the Hell City, Hell comp, it's tempting to make a crack about where they seem to be going). Miles Zuniga has been spending time back in Austin of late, and one assumes he's been busy with groupies as on Monday he was seen with scabs on his member. Oh, sorry, I mean he was seen with a member of the Scabs -- in his lap...The current issue of Rolling Stone sports full-page fashion shots of Lyle Lovett, looking for all the world like he'll be starring in Tim Burton's exciting new sequel, Edward Sparklerhands, and ZZ Top in what actually may be one of the coolest photos of their long career... Speaking of the Top, the announcement that Lynyrd Skynyrd will be taping an Austin City Limits performance (along with Indigenous) begs the question, "Whatever happened to the talk that the Li'l Ol' Band From Texas had hopes to finally do the show?" Lone Wolf Management's Bob Small says that nothing is imminent, as the group's heavy touring schedule precludes them making an appearance on ACL. Oh, okay. Thanks, Bob, that explains -- Hey, wait a minute! The band they're touring with is Lynyrd Skynyrd!!! Oh, well, you can see both bands at the Erwin Center on Dec. 30, then follow the Top around as their US dates have been extended through February, and they head overseas to continue "business as usual -- just rolling along" for God knows how much longer after that... "It wasn't like the last time, when they unceremoniously canned me," says former (again) Babe's manager Jim Hawk, but either way, he's still out of a job. This time, he says, with things being what they are financially on the club scene, owner John Jewett decided that given a choice, "he'd rather pay himself." Hawk says he's not too optimistic about finding a nightclub management position in town, but he's looking, as are former Cannibal Club boss Brad First and others, into the opening at Antone's when general manager Elizabeth Sweton vacates later this month. Danny Crooks' recent visit from the investor fairy has shown Hawk that miracles can happen, however, so he hasn't lost hope. "I actually had a dream last night," says Hawk, "where I drove by this gorgeous big building and on it was a sign saying 'Soon to be open -- Steamboat!' Merry Christmas, Danny!"... KUT radio in Austin will be doing their annual birthday tribute to Bill Hicks tonight (Thursday) at 10pm. Bill's pal Kevin Booth also says the new, improved Sane Man video (half-hour longer, with decent sound at last) is now finished and up for sale at http://www.billhicks.com... Our crowd-watchers wondered if this year's 101X Fest might erupt into chaos, as reportedly far more people than the sponsor expected were planning on attending the show featuring the aptly named Insane Clown Posse. Things went smoothly, I hear, even though fellow noisemakers System of a Down couldn't make it -- again! It didn't hurt their fans' confidence in the band that the group's drummer, who had broken his arm and forced the band to cancel their last Austin gig, flew in for the show to announce the band would do a free show for ticket-holders next month at La Zona Rosa. Of course, now we can wonder if there'll be mass rioting at that far smaller venue...