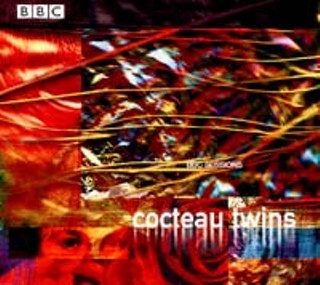 Liz Fraser and Robin Guthrie's contribution to rock & roll history may only end up as a footnote in pop music's millennial countdown, but you can rest assured it's bound to be a lengthy one, penned in an unsteady hand and looking for all the world as though it were set down by an ashen angel dripping crimson tears. Well, hey, they're that kind of group. This 2-CD, 30-track treasure trove of mostly unreleased sessions (domestically, anyway) from the BBC's John Peel show and other radio arcana is as close to slipping back to the lonely mid-Eighties as anyone would care to go (the tracks range chronologically, 1982-1996). Amidst the keenings of Fraser's voice, the past -- ethereal and gloomy and very, very goth -- snaps forward like a too-used rubber band. It smacks you upside the head and suddenly you recall why Lush's first two albums sounded so familiar (Guthrie produced them, naturally). Disc 1 wears its influences not only on its sleeve, but has apparently stitched together a nice corset/smoking jacket ensemble out of them; should they feel the urge, both Siouxsie and Budgie could make a fine, litigious case against the Twins. Even their dirge-like cover of Billie Holiday's "Strange Fruit" is tinged with skittish remnants of Siouxsness. Disc 2 evinces Fraser and Guthrie finding their footing, and for better or worse, forsaking the claptrap drum machinery of their early years in favor of more flesh-and-blood arrhythmia. Standouts are the lush, iridescent sorrows of "Seekers Who Are Lovers" and the hollow-hearted "Serpentskirt," which feel (and sound) more like angst-driven arias than traditional post-goth heartstings. Not everything here is up to the genius of 1986's masterpiece Blue Bell Knoll, an album worth every note if only for its lovely, alliterative titling. Throwaways like "Pepper-Tree" and the Danielle Dax-esque "Beatrix" sounded fine the first time around, thanks, and their inclusion here bogs down the forward motion, plodding though it may be, of the disc(s). Siouxsie & the Banshees will be remembered, if not by the masses, then by the rest of us with too much black in our wardrobes, but if anything the Cocteau's BBC Sessions serves as a heady, heavenly reminder that Ms. Mascara was hardly the only worthy contender for the goth crown of thorns. They're gone now, broken up in 1998, but thank dog for the wondrous Mr. Peel, who thought it wise to save these lachrymose tears for posterity.