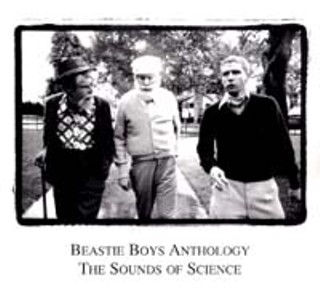 The Sounds of Science (Grand Royal/Capitol)

Mmmm ... it does go well with the chicken! Yes, indeed. Three MCs and one DJ (two actually -- first Hurricane, then Mix Master Mike) equals a body-movin', rump-shakin' 42-song stocking stuffer for that illest of SPIN subscribers on your list. Naughty and nice, The Sounds of Science delivers: the hits ("Fight for Your Right," "Sabotage," "Intergalactic"); early hardcore ravings ("Beastie Boys," "Egg Raid on Mojo"); pure hip-hop ("Sure Shot," "The Negotiation Limerick File"); and unabashed silliness ("Country Mike's Theme," "Boomin' Granny"). That's just for starters, too; even if there were another band in the known universe able to draw equally from Run-DMC, Jimmy Smith, Lee "Scratch" Perry, Antonio Carlos Jobim, and Bad Brains, they still wouldn't be half as much fun. (Beck tries, but there's only one of him.) So let's get with it. Disc 1, besides such Beastie touchstones as "Slow and Low," "Root Down," and a kickin' live version of "Three MCs and One DJ," boasts "Skills to Pay the Bills," a Check Your Head-era round-robin right up there with "Pass the Mic" and "So What'cha Want" (naturally, also included), as well as a couple of loud-hard-fast nuggets from their Aglio e Olio period, "Believe Me" and "Soba Violence" -- the latter inspired by a belligerent, inebriated street person in a Tokyo noodle joint. Before ejecting, please note the bootylicious Fatboy Slim remix of Hello Nasty's "Body Movin'" and the original "Jimmy James," containing the Hendrix sample omitted from Check Your Head for legal reasons. Now, Disc 2: Besides "Brass Monkey," Paul's Boutique chestnuts "Shadrach" and "Hey Ladies," and Q-Tip's "One, Two, Oh My God" on "Get It Together," this is where most of the truly outré shit lies. There's a dub version of "Pass the Mic"; the bangin' "She's on It," their first Def Jam single (written in honor of Madonna); "Netty's Girl," where Mike D croons falsetto pillow talk over crushed-velvet Bacharach keyboards; "Twenty Questions," a gentle bossa nova featuring Cibo Matto's Miho Hatori; and a live rendition of "Benny and the Jets" (yes, that one) featuring lead vox from an incoherent Biz Markie. Still not enough? There's the brand-new, yet old-skool single "Alive" (a definite keeper), mellow jams like "Sabrosa" and "Something's Got to Give," and an 80-page booklet overflowing with pix and detailed track-by-track notes by Ad-Rock, D, and MCA. All that and the sublimely twangy "Railroad Blues," which suggests the Damnations/Tupelo demo is the Beasties' for the taking anytime they get the notion. So come on. Cue up that Hank Thompson record and let the beat -- mmmm... drop?!?