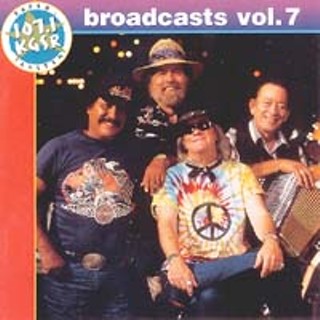 The annual rallying cry of KGSR's Broadcasts CD is that it seems to get better every year, but with number seven now in the can, it's a moot point. That said, Broadcasts Vol. 7 could well have the greatest number of truly inspired performances and maybe the most marquee names to date. On disc one alone, Billy Bragg unearths yet another gem from the ubiquitous Woody Guthrie archive; perennial participant Lyle Lovett does a letter perfect rendition of "If I Had a Boat"; Joan Baez sounds downright youthful on "If I Wrote You"; and after covering a Neil Finn tune ("Private Universe") on a previous volume of Broadcasts, Shawn Colvin duets with Finn here on "What I Get Paid For," a song they co-penned. By the way, that's also Colvin helping out husband/wife duo Kelly Willis and Bruce Robison on their duet "Angry All the Time" (billed in the credits as "Kay's sister"). That's not to mention other disc one notables like the redneck nirvana of the Gourds ("Gangsta Lean"), the Bandera hip of Robert Earl Keen ("Feelin' Good Again"), and the third testicle hum of head Crash Test Dummy Brad Roberts ("Mmm Mmm Mmm Mmm"). As usual, the second disc kicks off with an onslaught of South by Southwesters, who typically provide any given collection's most memorable three-song run; one year it was the Jayhawks, Robyn Hitchcock, and Graham Parker, and another year, Ron Sexsmith, Hamell on Trial, and Joan Osborne. This time, it's alt.country-turned-texturist Joe Henry doing the sexy and sparse "Skin and Teeth," followed by Beth Orton's stunning "She Cries Your Name," and Lucinda Williams' cooler-than-thou "Car Wheels on a Gravel Road." What's left? Dallas' Wes Cunnigham inserted amongst Texans both native and adopted Willie Nelson, Guy Clark, and Patty Griffin; a surprisingly moving Martin Sexton; Sheryl Crow; two living Lennons, a Canadian; and yet more Texans -- Ray Wylie Hubbard, Eric Johnson, Damnations TX. Is Broadcasts Vol. 7 the best ever? When they're all about this good, it's sort of a silly question. Oh, and that cover photo with a smiling Sir Douglas Sahm. It's enough to make you think that Jung was onto something.