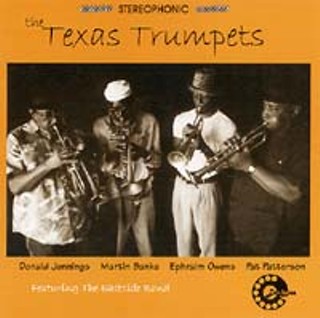 This local all-star association's cup brims with talent: Ephraim Owens is a young lion, bandleader/composer; Mark "Pat" Patterson has worked with Etta James and Otis Redding; Donald "Duck"Jennings spent time in the bands of Lou Rawls and W.C. Clark; and Martin Banks is well-known for his tenure with Duke Ellington and Dizzy Gillespie. All four shine throughout the 12 tracks here, Duck's boogie-woogie vocals on Little Walter's "Last Night," Banks' soulful solo on the bawdy "Sweet Spot," Patterson's muted horn on "Sassy," and Owens' added spark to the already-hot, flat-out jam "Tropical Breeze." But all this great playing would be talented wanking without the funky blue soul bed laid down by the Eastside Band: Clarence Pierce on guitar, Charles Shaw on drums, Burley J. Manor, Jr. on bass, Larry D.C. Williams on organ, and guest vocalist Matthew Robinson. The Williams-composed "One Night Stand" rings like the now-famous late-Sixties/ early-Seventies Blue Note releases by Lou Donaldson and Lonnie Smith. It's a freewheeling, free-feeling, mostly instrumental album bookended by "JB Intro" and "JB Out," where the four trumpets groove over a Horny Hornsian ostinato. Who knew Austin had so much trumpet talent?