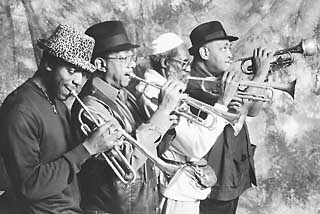 A bassist and drummer hold down a solid walking rhythm, almost a shuffle. The guitarist comps jazzy rhythm chords and throws in the occasional fill, restrained but assertive. A Hammond B3 goes from simmer to slow boil in the background, while a bawdy singer moans "Rebecca, Rebecca, get them big legs offa me." Floating on top of the whole mix are four, count 'em, four, trumpets, which never overpower the other elements. It's not like the octave-stretching lineups of Tower of Power or James (Brown) and the Famous Flames. No sax or trombone here. Just trumpets. Texas Trumpets. Make that Austin's Texas Trumpets, whose eponymous, freshly minted Dialtone Records CD reveals a smooth amalgam of R&B, blues, and jazz, warm-sounding but not overheated. The product of longtime Texas horn veterans -- with musical pedigrees including Joe Tex, Etta James, Otis Redding, Count Basie, and even the Motown and Apollo house bands, among others -- Texas Trumpets makes for some pretty remarkable stuff.

People tend to have some misconceptions about trumpets, that they tend to be warhorses better suited to the "William Tell Overture" and marching bands -- that the trumpet has all the nuance of Ethel Merman singing "Stardust." Certainly the trumpet can be an instrument of terror in the wrong hands, but it's a classy testament to these four local musicians that, even in a line, they always complement the Eastside Lounge house band (led by longtime music vet Clarence Pierce) rather than dominate it.

The Texas Trumpets are Mark "Pat" Patterson, Ephraim Owens, Donald "Duck" Jennings, and Martin Banks, all accomplished players with stories to tell and chops from here to the Apollo and back. Each of their stories are as unique as their individual horns' mouthpieces, but all are united by an obvious common ground: the blues, jazz, R&B. And trumpets. Texas Trumpets.

For his part, Patterson is a personable man in his 60s with a pencil-thin mustache and a black fedora. Reared in Pittsburgh, he played in a Marine band after joining the Corps, and after his discharge in the Fifties, he moved to Detroit and joined fellow Ford factory workers Hank Ballard & the Midnighters for five years before hooking up with Etta James, Otis Redding, and Joe Tex. Even so, Patterson admits that his original love was jazz, not R&B.

"I love jazz," he asserts, "but I was thrown into the other stuff, y'know, and I love it too, but if you don't watch yourself, I'll sneak up on ya and slip in a little Miles, real quick and easy."

Patterson moved to Austin in 1971, and began playing with Jennings in the Eastside Horns, among others. His tales are amazing, like hanging out with Charlie Parker, Dizzy Gillespie, and Billy Eckstein, or the time a strung-out Miles Davis borrowed his trumpet to play a gig.

Jennings, one of Patterson's first musical conduits here in Austin, was a childhood neighbor of Martin Banks on the Eastside. The two began playing together as far back as their high school, and after laying off the horn for a while after graduation, Jennings eventually began logging hours in the bands of local heavy-hitters Blues Boy Hubbard, W.C. Clark, and the Daylighters, then later with Lou Rawls and Etta James. In the Sixties, Jennings found himself giving up jazz and R&B for the rigidity of playing in a Tejano band, the Tim Torres Orchestra.

"Those licks I'd hit in blues and jazz, I just couldn't hit 'em in that band," laments Jennings. "That was a whole different deal, everything was different."

Jennings found himself playing with Clarence Pierce's band in the early Seventies, then went on to play in Matthew Robinson's Texas Blues Band. Meanwhile, Martin Banks, long Austin's grand ol' horn, kept right on climbing up the proverbial career ladder, and by now, the stories are well-known local lore: Banks went on to play with Ray Charles, Duke Ellington, Dizzy Gillespie, and the Motown and Apollo Theater house bands, to name a few. His musical résumé is an R&B lover's dream.

"We'd play for a week, and I'd go on the road with James Brown for a week,"says the 62-year-old horn man. "I played off and on with James from the get-go -- Maceo, Fred Wesley, Pee Wee Ellis, Joe Dupas."

Banks chuckles remembering his Apollo days with the James Brown Revue. His seat in the Motown house band found him backing the Supremes, the Temptations, Mary Wells, and every other band from Berry Gordy's stable. Banks, who teaches trumpet at Brook Mays Music to augment his musical income, has an even deeper pedigree than that, however. His father was a trombonist, playing with Chicago's King Kolacs Orchestra in the Forties, as well as John Coltrane, and was pivotal in influencing young Martin to play. Banks and Patterson have known each other since the early Sixties in New York, when Banks held down a seat in the Apollo band and Patterson came through with Etta James. Get these three together, and the stories start flowing like honey from their horns.

Ephraim Owens, the junior member of the band and yet still a veteran of Austin's Sixth Street funk and jam band scene, figures he'll collect some stories of his own playing with Banks, Patterson, and Jennings. Being in the presence of men who saw musical history in the making is a privilege and a learning experience.

"There's not really a whole lot of elders here in town," explains Owens, "but this situation here, I can see how they hang and the vibes that they throw off. It's wonderful -- a very enlightening situation."

Owens, in his early 20s, came to Austin at the midpoint of the decade after attending Dallas' Booker T. Washington High School and putting himself through a College Jazz Studies program via scholarship. He hooked up with the other Texas Trumpets through Eddie Stout, bass player in Matthew Robinson's band and the man behind Dialtone Records, which put out Texas Trumpets.

"Sometimes I think I'd give a big toe to be able to go back to those days," says Owens. "They treated the music with respect back then, they worked hard for what they had. Clubs don't really respect what you're doing, and even a lot of the players are more lazy now."

For years, Austin had a fertile music scene that folks living west of the interstate (or East Avenue, back then) hardly noticed. Even in the "enlightened" Nineties, the Eastside has blues, hip-hop, and jazz acts totally unknown to the rest of the city. In the Sixties, 11th Street, 12th Street, and Rosewood were lined with long-forgotten places like Charlie's Playhouse, the Blue Flame, the Silver Dollar, and Shorty's, and live music blasted away nearly every night. Taking advantage of lax zoning-law enforcement, homeowners would turn their houses into juke joints complete with bands and beer.

"The first time I came to Austin to play, we stayed at a little hotel over at Navasota and 11th, the Deluxe Hotel," recalls Patterson. "And here was the show. We were all on the bus: Bobby Blue Bland, B.B. King, Etta James, Hank Ballard & the Midnighters, the Five Royales, Little Willie Jones, and Big Mama Thornton. All in one show, all staying at that one black hotel, the Deluxe."

"I caught Satchmo and Jack Teagarden at Doris Miller [Auditorium] as a kid," Jennings interjects. "We had to sneak in the back door, but I went in. I had to hear that! Boy, did they play."

Patterson remembers some other adversities black artists faced in the Fifties. While on tour with Ballard, Patterson and the other Midnighters were refused rooms by a Boston hotel. As chance would have it, Stan Kenton and his band were staying in the same hotel. Kenton had a word or two with management.

"All of a sudden, they had all kinds of rooms open up," remembers Patterson. "I'll never forget that, and I'll always idolize Stan Kenton as long as I live."

Certainly not a welcome situation, but an all too familiar one in the America of the Fifties. As painful as hearing some of these stories is, overall, the yarns these men spin are fascinating. It'd be easy to spend an entire evening hearing about James Brown, Louis Jordan, Ray Charles, B.B. King, and all the rest. It's all balanced out, however, by the music: deathless, timeless stuff.

"It's all in the tones, man," says Patterson. "The tone is just so pretty. You hear some chords in there, and maybe it's just me, but stuff like that just tears me apart. I hear somethin' that beautiful, it just lays with me. It's music that doesn't come from wax museum figures or dusty old relics. It's the real deal."