The Clash and Joe Strummer & the Mescaleros

Live From Here to Eternity, and Rock Art and the X-Ray Style (Sony) 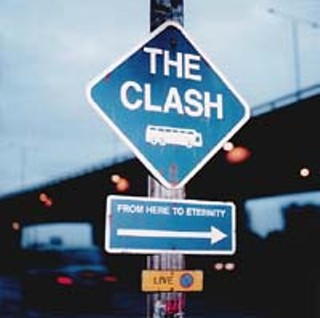 Live From Here to Eternity (Sony)

Like the Beatles and the Rolling Stones a generation earlier, the Sex Pistols kicked open the door, and the Clash walked through it like Mandela leaving his cell. Like kings. All the way From Here to Eternity. Live. Nearly 20 years after the fact, the Clash storm back to these shores with a sound and message as liberating today as it was back in 1976, when both they and Sex Pistols played their respective debuts in London. Exhilarating, actually -- all 63 glorious "Guns of Brixton" minutes of it. All the hoary hits are here, "London Calling," "Clash City Rockers," "I Fought the Law," "Should I Stay or Should I Go," "Train in Vain," all recorded between 1978 and 1982, when Joe Strummer and bassist Paul Simonon fired Mick Jones from the quickly expiring band (drummer Topper Headon had already gotten the sack for heroin abuse). Notable exemptions include "White Riot," frequent show-opener "I'm So Bored With the U.S.A.," and perhaps something from Give 'Em Enough Rope (nah!), but better to have "Capital Radio" from Black Market Clash and "The Magnificent Seven" from Sandinista. Both the early punk band and the quickly mature Stonesian rock band are represented here, with a noticeable fade separating the two halfway through the disc. Culled by the band itself from a variety of sources, From Here to Eternity Live comes off like a one-night stand, from the delicious feedback tease on the stomping opener "Complete Control" to the opiated junk-funk groove of closer "Straight to Hell." Some might complain that ragga sound of "(White Man) In Hammersmith Palais" and "Amagideon Time" mess with the album's momentum, but that was the Clash: four blokes, one sound. Case in point is head bloke Strummer, primary lyricist and political conscience of the band. For his first solo LP since 1989's Earthquake Weather, Strummer has a sound all right -- the sound of a someone without anything to say. The stripped-down, weed-tempo sound of Rock Art and the X-Ray Style is as barren as the absolutely wretched and cliched lyrics to "The Road to Rock & Roll," a song you just can't imagine Joe #@%^& Strummer penned. "Diggin' the New" shows vague signs of life ("Got no time for the Luddites always lookin' back down the tracks"), and opener "Tony Adams" could pass, but "Forbidden City," which at least has a hook, sounds like a Triple A version of "Ghetto Defendant" from Combat Rock. Everything else, shite. A barren desert. From Here to Eternity Live -- oasis, circa 1999.