The Butthole Surfers find themselves uncovered, Don Walser takes a dive, and time and music march on. 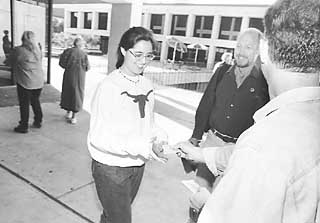 Of Art and Astronauts

With their master tapes for the aborted The Last Astronaut album returned to them by the record company, the Butthole Surfers must've thought the fallout from their trouble-filled association with Capitol Records had at long last subsided. No such luck. Last week, a friend of King Coffey suggested that the drummer might want to take a look at the Web site for young Capitol band Marcy Playground. What Coffey found there was the cover art to Marcy's new Shapeshifter, which looked more than vaguely familiar; it was, in fact, the same art that Buttholes guitarist Paul Leary had conceived for the Surfer's Astronaut album! "Paul made the sketch for the front and back of the album," explains Coffey, "and got one of his favorite artists, Mark Ryden, to execute it. I guess Capitol liked it enough to give it to Marcy Playground instead." The troubles don't end there, he adds: "They also won't let us use the front cover because it looks too much like the back!" Ironically, on the Surfers' last actually released Capitol album, Electriclarryland, the band found themselves in a mini-controversy when it turned out a version of that album's cover art by Paul Mavrides had previously been purchased and used on an indie label album by Thomas Anderson; Capitol solved that problem by changing the cover to a photo of a cute prairie dog, not because of any theft issue, but because they feared that children seeing Mavridez' illustration of a pencil sticking in an ear would naturally be driven to imitate the act. Coffey says the band can't really do anything about Capitol's use of the Leary/Ryden art because the label technically paid for the painting as a recoupable expense from the Astronaut art budget. "I'm pissed," he steams. "Not only did Capitol steal the cover, but now we have to come up with new artwork too, which really blows." Leary himself expressed his displeasure on Marcy Playground's Web site. "This is truly pathetic and unoriginal, to have to take my idea and call it your own," he posted, adding for no particular reason, "The moon is a UFO." Playground frontman John Wozniak countered that MP was "just as baffled and mortified as Paul. Originally, I suggested to the label that Mark Ryden should do our cover art because I admired his work. What we got from Mark, via the Capitol art department, was this piece. There was never any mention that Mark had painted it for the Surfers. I can't apologize enough for Capitol Records' lame maneuver, but I can, at least, genuinely say that I am honored to have a record cover partly designed by Paul Leary of the Butthole Surfers."

As far as Capitol's take on the situation, Linda Cobb, art director for Shapeshifter, said she couldn't speak for the label, but that a faxed statement would be forthcoming to the Chronicle. That document never arrived, but in the interest of fairness, here's what Coffey thinks it should have said: "Even though the Butthole Surfers paid us a whole lot of money to get their album back from Capitol, we didn't think they wanted their artwork back too. Silly us! We liked the artwork so much, we just hated the idea of nobody getting to use it. Fortunately, Marcy Playground thought the back cover was just great because it didn't say 'Butthole Surfers' on it. Similarly, it wouldn't be fair to let the Buttholes use the front cover (the one that says 'Butthole Surfers') for that might make people think it's a Marcy Playground album. In conclusion we're just sick about it and we wish the Buttholes all the best success with their new label." Asked if he had anything new to report on the Buttholes' current project, now to come from Hollywood Records, Coffey could only smirk, "Ha! Given our track record since the spring of '98, I think it's best to not guess any more on release dates. I do have a feeling a new title would be in order, since the last one seems to have been cursed."

The Walser Falling Down

Don Walser has managed for more than a half century to avoid the slick music of Nashville -- unfortuately, no one told him about the sidewalks! Following a triumphant debut performance at the Grand Ole Opry last Saturday (see "Live Shots"), wherein Lisa Shively of the Press Network says the audience "didn't know who he was, they didn't know what to expect -- and he really woke up that crowd!," the 65-plus- year old Walser slipped and fell getting out of his vehicle. "His adrenaline was still pretty high," advances Shively, "and he didn't wait for help getting out. He probably thought he was 20 years old." Ever the trouper, and despite a cracked rib and chipped elbow, Walser played a scheduled Nashville club date the following night and even declined to take painkillers as he feared they would affect his performance. Afterward, he and his wife began the return trip to Austin, and though he reportedly plans to take it easy for a few days, he'll be back onstage for a Houston gig this Saturday. And yes, his next move should be a rise, not a fall; Walser has been invited back to the Opry on a yet-unspecified date, this time to appear on the televised portion of the show!

Dexter Freebish will be leaving for L.A. in early November to begin work on their debut album for (uh-oh!) Capitol Records. Hey, guys, if you want to get on their good side, I hear the label still has a great leftover photo of baby dolls and meat that the Beatles never got around to using. Ask the label guys about using it -- you know how they hate to be stuck with old inventory... Local comic actress Margaret Wiley, of Esther's Follies fame, passed away suddenly this week. Music fans may remember her as Stevie Ray Vaughan's guitar-loathing girlfriend in the classic, locally produced "Cold Shot" video, certainly one of the best and funniest promo clips in the history of the medium. See the Arts section for more about Wiley... Speaking of good music video, the vid for the Horsies song "Cookie Cutter Master," which the band got back together to make around a year after their 1997 breakup, was recently named "Best Music Video" in DV (Digital Video) Magazine's 1999 Media Masters Competition... Despite the fact that Sir Mix-a-Lot and the former Presidents of the USA have started a band called Subset in Seattle, the Austin band of the same name (who'll be playing the Red Eyed Fly on Friday) says they intend to hang on to the moniker, for the time being at least. They do ask, however, that, "If you know of any washed-up, novelty-band members or one-hit-wonder rappers looking for a new gig, please give 'em our e-mail address so we can get this act together"... "I can now die happy," says Jody Denberg, who finally managed to finagle a phone interview with Paul McCartney last week. The two chatted about mutual friends Ronnie Lane and Ian McLagan while setting up the recording equipment, then got on to the serious stuff like whether Sir Paul will make a new studio album of original material next year (yes) and whether he hopes to remix more Beatles material à la the Yellow Submarine "songtrack" (no). The interview runs this weekend on KGSR during Denberg's regular Sunday night new music show (8-10pm), and up next for the interview-disc king are tentatively set sessions with Patti Smith and Warren Zevon. In the meantime, KGSR's Broadcasts Vol. 7 compilation CD will be released the day after Thanksgiving. The double-disc set, with the Texas Tornados on the cover, includes the previously unreleased acoustic Eric Johnson song "Tribute to Jerry Reed," a Billy Bragg track of rediscovered Woody Guthrie lyrics that wasn't on Mermaid Avenue, and a Neil Finn/Shawn Colvin collaboration, "That's What I Get Paid For," as well as contributions from Willie Nelson, Lucinda Williams, Sheryl Crow, Lyle Lovett, Bad Livers, the Gourds, Bruce Robison & Kelly Willis, Beth Orton, Guy Clark, Patty Griffin, and both Sean and Julian Lennon... You'd think that the line to get tickets for Garth Brooks' Austin City Limits show would have been a madhouse, but since the ACL team was smart enough to not announce the handout until it actually occured (8am Tuesday morning), things apparently went smoothly (sleepily?). My guess is that the majority of Brooks' fans live too far from the KLRU studios to even attempt making it to town in time! Hopefully, suburbanites and city-dwellers alike will have no trouble making it out to BookPeople at Sixth and Lamar tonight (Thursday), 7pm, for the signing party and acoustic songfest in honor of the release of Austin City Limits: 25 Years of American Music. Entertainment will be provided by Eric Johnson, Kelly Willis, W.C. Clark, Ray Benson, Marcia Ball, Charlie Robison, Sara Hickman, and Lou Ann Barton... Look for the area electronica community to set sail on raving seas this Saturday. Technophiles will be assembling a group at Lake Travis on five double-decker pontoons, with DJ's Jason Scott from Underground Sound, Herb from Alien Records, Rev. Kathy Russell, Luna from System 7, and Spiritual Medicine from Club M, each commanding their own vessel. The boats embark from Carlos 'n' Charlie's at 5:30pm and return at 11pm. Hopefully it won't be the attendees' stomachs that end up doing most of the spinning. Meanwhile, back on land, tonight (Thursday) marks the opening of "phase one" of the new club Velvet at 611 E. Seventh, with New York DJ Jimmy Van Malleghem. Phase two of the former Ohms/Red Room proceeds in December, and the final phase comes on New Year's Eve, After that, thanks to Y2K, we'll all find out how difficult it is to scratch on a hand-cranked gramophone...