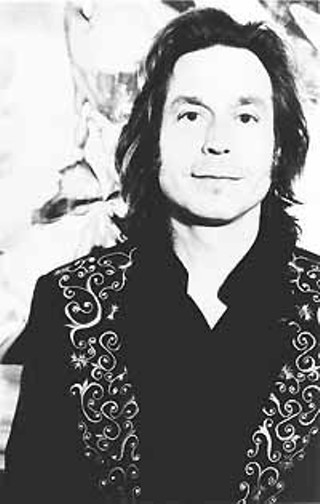 It's almost as if Jim Lauderdale is a hitchhiker, standing on the shoulder of the musical highway, one thumb in the air. Artists from the Dixie Chicks to John Mayall have picked up his songs, but his own direction is mysterious. His two recent albums lie like a fork in the road ahead, and he's not saying which way he wants to go. Maybe he doesn't want us to know. Maybe he just wants company for the ride. The 42-year-old singer and songwriter is amused at being called a hitchhiker. Recently, he found himself stranded in his native Chapel Hill, N.C. He'd gone to meet friends at a restaurant before a show that evening, and was told it was "just across the street" from the venue. It wasn't. Later, when time ran short after dinner, he found himself further than expected from his destination and without transportation, so he stuck his thumb out and prevailed upon a passing motorist. He made it to the gig, declaring the experience "hectic but good."

"Hectic but good" is also how Lauderdale describes his life these days, and considering the Nashville-based performer had not one but two albums hit shelves recently, that may be putting it mildly. Onward Through It All (RCA), the latest in Lauderdale's critically lauded oeuvre of solo albums, came out last month. Leading the listener through 16 of Lauderdale's sterling country compositions, the album is polished to a luster by his rich vocals.

To call Lauderdale "prolific" barely scratches the surface of a songwriter who has had no less than 10 songs recorded by George Strait. Other performers that have recorded his mater- ial include Vince Gill, Patty Loveless, Mandy Barnett, Doug Supernaw, and Kathy Mattea. Once upon a time, Lauderdale's goal was to meet George Jones. Now, Jones and Loveless have won a CMA award for Lauderdale's "You Don't Seem to Miss Me." He's just as proud of songs co-written with notables like Harlan Howard, Dixie Chick Emily Robison, Melba Montgomery, and longtime Grateful Dead lyricist Robert Hunter. Lauderdale has recorded a half-dozen albums himself, not including the Stanley collaboration, and even boasts credits as a producer.

But if his writing and recording credentials are estimable, Lauderdale is just as dedicated to the "singer" half of the "singer-songwriter" label. He has more than three dozen vocal credits over the last two decades, six times with Dwight Yoakam alone. Mandy Barnett, Charlie Louvin, Kelly Willis, Rodney Crowell, Mark Chesnutt, and Buddy Miller have all wrangled harmony and back-up work from him for the best of reasons: his inviting, honeyed baritone.

Since last year, Lauderdale has spent a considerable amount of time singing harmonies for Lucinda Williams on the Car Wheels on a Gravel Road tour, sharing the stage at her Austin City Limits taping(s). He filled in at Merlefest 1998 for an ailing Ralph Stanley II, and was declared an honorary Clinch Mountain Boy for the save. According to Lauderdale, his work with Stanley has been "one of the highlights" of his career so far, culminating in his debut on the Grand Ole Opry last weekend Yet, no matter where the work takes him, songwriting is Lauderdale's creative voice and recording his medium.

"The melody always comes first for me," he explains. "Sometimes, the title will hit me simultaneously. With Robert Hunter, I knew he was a Ralph Stanley fan, so I got in touch with him and he sent me the lyrics to "Joy, Joy, Joy.' As I was reading the lyrics, the melody just -- [pauses] came to me.

"When it was time to go record, there were some cover songs I wanted to do -- all Stanley Brothers songs -- and Ralph wanted tapes of what we were going to record. I had the Robert Hunter one, but I was really sweating about finishing "I Feel Like Singing Today,' "Another Sinner's Prayer,' and "Like Him.' I'd started the melodies and had the titles, but I lost the notebook with all the lyrics. I had to start all over. I vaguely remembered one line, but I don't retain that stuff very well when I'm working on it.

"Ralph and I end- ed up doing 12 songs for the first segment, and I wanted to do a few more. When I was going in the studio with Ralph a second time, I got hold of Robert again and he sent me "Trust (Guiding Star).' A melody came out, but it didn't quite fit what I was doing with Ralph so he sent me another one, "I Will Wait for You.' This time, the melody just came out as I read it. And "Trust' went on Onward Through It All.

"I would get up early and stay up late for I Feel Like Singing Today. We were working in Big Stone Gap, Virginia, because I wanted it to be convenient for them. And I wanted to soak up some inspiration from those mountains around where Ralph and [his brother] Carter grew up." 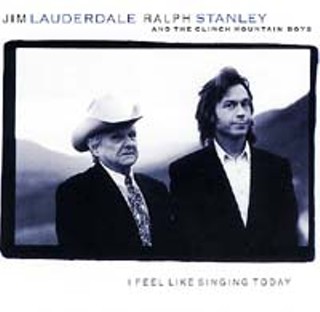 Lauderdale grew up the son of a music teacher and a Presbyterian minister in North Carolina, where bluegrass and country are the bucolic region's indigenous sounds. Traditional country music believes in Jesus the same as it believes in love and sin, with deep and abiding faith. Lauderdale cautiously acknowledges the spiritual influence on Singing, but qualifies its impact.

"Some people may not be aware that it's a big part of bluegrass to do gospel stuff," he says. "I'm not sure why so many spiritual tunes ended up being on there. It may have been my upbringing, but it wasn't a conscious thing. It just unfolded that way. It may have been being there in the hills near Ralph. I love Ralph's voice; it has such an ancient sound. It harkens all the way back to Scotland and Ireland."

So do some of Lauderdale's own tunes, as befitting the Celtic and Anglo-Saxon roots of country and bluegrass. "Calico," from Onward, has the feel of an English ballad, and words like "potion," "maiden," "birdie," and "woes" bears that out. But the song almost never happened.

"Years ago, I had a song called "Calico,' but I lost the tape and lyrics," he recalls. "It was a totally different song, but the image kept popping up in my head. I don't know why that particular story came out, but it just automatically wrote itself.

"Usually when I co-write, it's a spontaneous thing," he continues. "I worked with Buddy Miller in the opposite way. He was working on his album that came out a few months ago and gave me tape of a couple of melodies with titles, and I wrote the rest of the lyrics.

"When I'm in a real heavy writing mode, I don't read much or listen to much," he says. "I go in spurts about book-reading. I always read the paper; I am reading a biography of William Blake and some classic Tai Chi texts -- I'm still real into that. And another one I'm reading is called Don't Know Much About The Bible. And I got this book about Jerry Garcia. But it's hard to shift my focus from work, and I want to keep my head clear when I'm working. I'm not very good socially during that time, either."

In Nashville, "rebel" is a term often used to describe someone who prefers hard-core country. That designation fits Lauderdale, although his modest, unassuming persona doesn't seem the type to challenge Music Row sensibilities. Instead, he shifts into professional mode. Living well may be the best revenge, but in Nashville, nothing beats a hit. Meanwhile, the demands of the musician's life continue.

"I'm out playing a little bit every week," says Lauderdale. "I'm solo in Austin, and then the next day I fly out to open up for Lucinda in Santa Cruz. My plan is do some gigs, but to write whatever it is that's coming out next.

"I was really worn out after these last two records," he continues. "There was a bunch of busy, catch-up work, but then I thought I'd better start getting something ready. I'm going to go back into the studio before too long, because I'd like to have an album out before next summer, so it needs to be finished by February or March.

"Buddy and I finally set aside time next spring to go and do a duet record. I love singing, with him and with Lucinda. Our vocal blends are real natural. He and I have written together, but right now I am writing what comes out. And I want to do another bluegrass record. I make my own deadlines."

In books and film, a hitchhiker usually departs with some pearl of wisdom. Lauderdale simply leaves his songs and therefore a part of himself. For him, right now it's the solo album and the collaboration, Nashville's constant demand for new product, and the never-ending road. Yes, it's a little hectic, as he would say. But good.

Margaret Moser rode on the same bus with Lucinda Williams and Jim Lauderdale during part of the 1998 Car Wheels On A Gravel Road tour. No charges were filed. 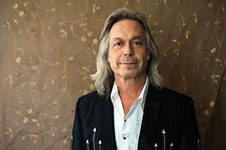 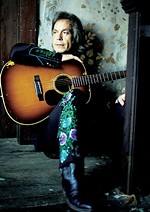 My SXSW
By Jim Lauderdale