Liberty Lunch is finally reduced to dust bin debris even as Mueller Airport hosts the "Airport Rave" and some 6,000 attendees, one of which was NOT Biz Markie, who was a no-show. Who says there are no more live music venues in Austin. Once-local guitarist Evan Johns hospitalized in DC with severe liver problems, just as Bad Livers finish recording a new album. Ken Lieck, King of the Segue. 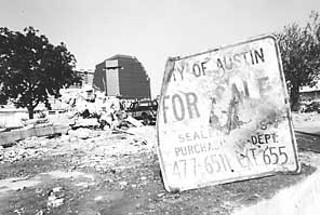 Well, Liberty Lunch is gone. I know, it's been gone since a few days after the "Gloriathon" (shudder), but I mean now it's completely gone. Razed. Reduced to rubble. Gone to join the choir invisible. This, my friend, is a late Lunch! Between the club's closing date and a few days ago, the Lunch remained a popular hot spot for treasure and souvenir seekers, sometimes to the chagrin of the construction workers who were at work day and night tearing the place down (for what it's worth, the trick was to sneak around the back). I'm told even Mayor Kirk Watson took a memorial brick from the site -- a magnanimous gesture tantamount to the matador claiming the bull's ears and tail after a successful kill.

It takes more than the death of a live music venue to stop the sounds of music in Austin, however, so time and technology continue to march forward. An estimated 6,000 attendees made it out to the old airport for last Friday's rave, er, "festival" (see "Live Shots"), but as anyone who went can tell you, Biz Markie was not one of them. What happened to the rapper? "To be honest," offered organizer Noah Balch on Monday, "nobody knows." He had contacted Markie's agent, manager, and on down the line, but no one could account for him. By Tuesday, Markie's people reported that the rapper had been stuck in Atlanta at the time of the show, and along with relating his apologies, arranged for the MC to appear at Arktic, the next show planned by Noah's company Ark Productions, set for November 13 in Houston. There's still counting and accounting to do -- Balch plans to release figures next week on how much cash the rave raised for the Lance Armstrong Foundation -- but in the midst of tying up remaining loose ends from the airport rave, Balch is busy wrapping up the last days of the Red Room at 611 E. Seventh. That club's final show will be an appearance by U.K. breakbeat pioneers 4Hero this Friday, but the venue will rise from the ashes at the end of October as Velvet, with a slate of international spinners set to ply their tasks there. Then comes work on Balch's next big rave-fest in Austin, coming next spring, but other than saying he's looking at a couple of locations (not including Mueller Airport), Balch notes he'll let a little bit of the winter pass before he even starts to seriously think about that.

Of course, if you weren't at the rave last Friday, you were probably attending the most "anti-rave" event possible: Motörhead. While more than a few of those venturing out to the Back Room that night talk (shout) about having their ears blown off at the show, Lemmy and the band had reportedly asked for the loudest sound system in town and were still disappointed. Not fan Carl Normal, who reported Saturday evening that he'd only regained about 50% of his hearing and that the then-onstage Honky sounded like Abra Moore in comparison. It was just prior to Honky's set at the Red Eyed Fly that visitors of the Red River strip of clubs discovered that they were the ones in danger of really getting blown away. Around midnight, a fleeing felon in a large, recent-model pickup truck ran smack-dab into the log supports holding up Stubb's. Witnesses say the man then sped south on Red River, swerving at one point as if to charge at a uniformed police officer, and zoomed through heavy Sixth Street pedestrian traffic in his escape attempt. Apparently nobody was injured during the rampage, though strangely, I never saw it turn up on the TV news or the daily, and the APD Public Information Office receptionist told me she was unaware of the incident. By Monday, the damage to Stubb's facade had already been repaired, leaving only a stretch of "Caution!" tape in its wake. Hmmmm. Evidence quickly cleaned up, police keeping mum, attempt to destroy live music club and flee the scene. Could the driver of the truck have been... Mayor Kirk Watson?!?

A month or two ago I was asked if I had heard anything about great Austin guitarist Evan Johns being in ill health. Well, Johns, a hard drinker from the get-go, has often had health problems, so I wasn't too surprised at the question, but last week Johns' system took a turn that was more extreme than most people around him expected. Johns is currently in a Vancouver hospital suffering from severe liver damage that had him, at least briefly, in a coma. "Evan is in the final stage of liver disease," explains an e-mail from girlfriend Sue Stack (s_stack@bc.sympatico.ca). "What has happened is the liver stopped doing its primary function of cleaning the toxins out of the body. Instead, the toxins went into the bloodstream, and have gone through the bloodstream into the brain. Unless a miracle occurs, he really is at the end of his life." Stack has been trying to contact friends of Johns, known here in town for his tenure with the Leroi Brothers, as well as his work on Big Guitars From Texas, his work with Danny Gatton, and a pair of raucous collaborations with Eugene Chadbourne, but it hasn't been easy. "For those of you who ever had occasion to see Evan's address book, it has numbers, addresses all over every page in all directions!!!" As someone who once got a long distance wrong number call from Evan at 4am ("Oh, I see. I wanted the number right below yours. Well, how's things goin'?"), I can identify with that. I can also join with the rest of Johns' friends and fans in praying for that miracle.

It makes for a rather tasteless segue, but the Bad Livers are "all done" with their next album, which bassist Mark Rubin calls "a complete success." The disc was recorded at Cedar Creek with producer Lloyd Maines for Sugar Hill Records, who say the album is tentatively set for release as early as January 2000, but that could change drastically... Speaking of the millennium, you've probably already heard that Mayor Watson's "gift" to local music fans is a free downtown New Year's Eve bash featuring Lyle Lovett, Shawn Colvin, Kelly Willis, Robert Earl Keen, W.C. Clark, Bruce Robison, and Aztex on two stages (Third & Congress and Ninth & Congress). With more than 200,000 people expected to show up, sounds like this gift is ticking... Good and bad news for jazz fans: This Sunday, 1-10pm, the Warehouse District Jazz Festival presents Thom Rotella, 3rd Coast, Thomas Hughes Quartet featuring Denice Brooks, Blue Millennium, Nash Hernandez Orchestra, and Kyle Turner. There'll be three stages in the Colorado/Fourth Street area, and admission is free. On the bad news side, Austin Jazz & Arts Festival honcho Harold McMillan announced this week that the Waterloo Park portion of his annual jazz festival is being discontinued next year. A fax from McMillan states that "barring a significant infusion of private support and corporate underwriting (i.e., a fully funded project), next season's Jazz & Arts Festival will only consist of touring shows, evening concerts in live music venues, and other art activities around the city"... Libbi Bosworth is back from California. Well, almost back. She's currently residing in Houston, with a lead on a good job that might land her back in Austin. Bosworth was heard working up new material at the Continental Club on Saturday, and is said to be looking for a label to issue it... Just last week, I was asking a colleague if the Peenbeets had ever released an album. Two hours later, I walked into a gig at the Hole in the Wall at precisely the moment that frontman Greg Beets was announcing he'd just gotten copies of their debut Peenbeets Get Beet Up, which wins the "most commercials per album" award over Sigue Sigue Sputnik. There's a release party this Friday at the Red Eyed Fly with Drums & Tuba. Beets also earns the "Willie Watcher of the Week" honor for his observation that "the final regular season Astros game in the Astrodome featured a two-hour postgame celebration featuring Willie Nelson singing 'Turn Out the Lights.'" Send your unusual Willie spottings in to "Dancing About Architecture" to win valuable prizes and admiration. Between the conclusion of "Willie Week" on the Austin Music Network, Mr. Nelson's appearances at the Austin Film Festival, and his show at Stubb's tonight (Thursday), you people should have a field day... The Peenbeets and other fans of kings of quirk the Judy's will be thrilled to hear that a cache of lost songs and demos has been found and preserved in MP3 format at http://www.thejudys.com... Earthpig's official farewell show was quite an affair, I hear. Abra Moore, Kelly Willis, and Tony Scalzo were just a few of the local musicians in attendance, and like many artists looking to start a new life in the big city, the Pig, aka Adam Bork, offered much of his clothing for sale at the performance... Good thing Buick MacKane kept their wardrobe (like Alejandro Escovedo's purple, frilly, see-through blouse). They're playing a 10th anniversary gig at Babe's next Thursday... If you haven't added Trophies to your list of local live music possibilities, note this weekend's schedule, which features Blues Boy Hubbard on Friday and the Chumps, Teen Cool, and Hard Feeling on Saturday... The Alamo Drafthouse has scheduled some last-minute showings of the cult fave "Dark Side of the Rainbow" (aka Pink Floyd's Dark Side of the Moon played as accompaniment to The Wizard of Oz) this week, starting on Friday and running through Thursday. Screenings are at 9:45pm, with additional midnight shows on Friday and Saturday. And since last year's live music/silent film series pairing of Nosferatu and Brown Whörnet was such a success, there will be an encore performance next Friday, October 15 at 7 & 9:30pm ... If you wanna be in the movies for real, note that the makers of Rowdy Roundup: Night of the Killer Piñatas have changed their minds about this Saturday's big shoot being VIP only. Anyone who wants to dress up in S&M gear or Western wear (is there a fundamental difference?) can come out and get on film as Swine King, Whiskey Dent, Handful, Pocket FishRmen, Punkaroos, and Miss Xanna Don't's onscreen band Satellite Ponies mug for the camera. I'm told that for the most part, the bands will be playing real sets, not just repeating one song ad nauseum for filming purposes, so it'll be a real party. Too-simple directions: 183 south past new airport; left on 812; right on 973; left on Moore to 12014 Moore Rd.... Oh, to the person who called me at home to declare their rage over Stevie Ray Vaughan albums being sold on Time Warner cable channel 37, because SRV "Couldn't Stand the Weather Channel," don't you have a radio show to do or something?...