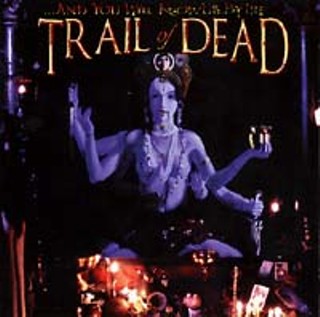 ... And You WIll Know Us By the Trail of Dead

In both performance and on their 1998 self-titled Trance Syndicate debut, Austin's ... And You Will Know Us by the Trail of Dead have been more style than substance. Sound and fury over songs. On Madonna, their second full-length and first for North Carolina indie Merge, not much has changed except for a minor detail: the sound wave. Whereas ... And You Will Know Us by the Trail of Dead was all sturm und drang signifying little or nothing, Madonna rises and falls in an altogether more cohesive rhythm, like breathing. Or, in this case, hyperventilating. The local quartet's familiar night-and-day dynamics, raging alternative punk rock giving way to ambient psychedelia, is a staple of this decade -- and here in Austin, of Sixteen Deluxe. Given the fact that parts of Madonna were engineered at the Bubble, 16D's South Austin studio -- the majority of the album was done at ZZ Top's Lone Wolf Studio by producer Mike McCarthy -- it's fitting that Trail of Dead's sophomore release is far and away the best alt.rock album to come out of the River City since their former Trance labelmates' Emits Showers of Sparks. Top-rate. Starting with a sound collage piecing together the band's ominous moniker, a tense, throbbing bassline and pounding tom-toms take over just long enough to clear a path for writhing vocals and bashing guitars; "Mistakes & Regrets" morphing into "Totally Natural" segueing into "Blight Takes All" giving way to the rest of the album. The minor chord meloncholia of the fourth track, "Clair de Lune," the single best song Trail of Dead has penned, brings Madonna to a sudden clearing, only to plunge her back into a "Flood of Red," a miasma of sound that kicks in with a U2 bang and explodes into one of the good, long, end-jam bashings that drives this well-edited, 45-minute CD home like a stake through the heart. "Mark David Chapman" makes the case for Madonna's printed lyrics, an uptempo creeper that drops off the seven-minute cliff of a brooding, thrashing "Angel Dolls." An atmospheric piano interlude sets the stage nicely for the furious Atari Teenage Onslaught of "A Perfect Teenhood," with a disaffected, repeated "fuck you" at song's end wringing out the listener with a sneer. The solemn, closing "Sigh Your Children" wouldn't be missed, but its deconstruction into Trail of Dead's "Revolution #9" noise is appropriate. It ends with a computeresque zip, their wave depositing you back on shore sated and smiling. Bodacious ride, dudes.

... And You Will Know Us by the Trail of Dead, Madonna