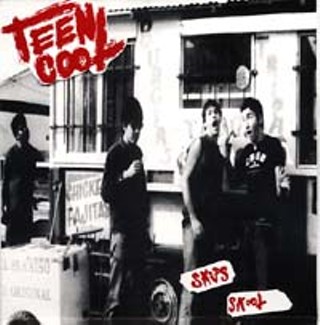 John Waters fans will undoubtedly remember Mortville as the hidden berg populated by derelicts, felons, and assorted social deviants in his 1977 movie Desperate Living. The two-year-old local record label known as Mortville displays similar under-the-radar characteristics with its prolific output of one-minute musical loogies created behind the bushes right in your own backyard. While other local labels have moved away from 7-inch singles, Mortville continues to prove the format's viability within its punk-hewn market sliver. The label's most powerful single to date is "Play Your Own Theme Song," which features the Chumps, Commies, Reclusives, and Los Tigres Guapos, and doing just that. Writing a theme song often helps a young band refine their musical goals, as the Chumps prove with this telling mission statement: "Hey mom, hey dad, hey boss, hey God. I'm a fuckin' chump!" The Commies make it a double play with the liberating refrain, "Fuck you, we're the Commies. We don't give a shit," and Los Tigres Guapos deliver their theme en Español with all the bravado of a bullfighter entering the ring. A second "Play Your Own Theme" compilation is reportedly now in the works. Los Guapos' own six-song single is a somewhat atonal soundscape that succeeds on the odd bounce or handclap. Its rot-gut production gives the music a drunken house party vibe that works especially well on "Seven." (Be sure to catch LTG's turn as archvillains in the Collegians' hilarious full-length video, The Collegians are Go!) Before going their separate ways, the Secret Lovers were one of the more promising punk bands in town. With former Motards guitarist Dave Head and bassist cum Mortville founder Toby Marsh in tow, the trio paints their four-song EP with growling vox and flailing guitar work that slashes through the wax like an out-of-control power tool in a Wes Craven movie. Houston-bred Teen Cool takes a much more classical approach to giving the world a middle finger in their three-song epic, "Teen Cool Skips Skool." Though the trio's music takes too few chances to evolve beyond standard-bearing punk, no one but the teacher's pet would argue with a sentiment like "Fuck Skool." Society of Friends aka the Quakers appear to be a bit less menacing at first glance, but their single detonates right in your face like a burst of angry firecrackers. Their distorted six-string blitzkrieg coupled with ear-splitting screams in lieu of singing is enough to get you committed in 48 states. Vocalist August Alston must have been coughing up blood for days after this recording. (Mortville Records, PO Box 4263, Austin, TX 78765)