The Cornell Hurd Band: At Large

When it came time for Cornell Hurd to record hisself a live album, he eschewed the grand and glamorous for the down-home waffle-fry funk of the Texicalli Grille. Recorded live in one long night at the South Austin eatery, At Large is a fine helping indeed, a healthy how-do from the skyscrapin' honky-tonker; a tongue-in-cheek champeen known for mixing honest footshufflin' country with a double-shot of low hilarity. Clocking in at 75 minutes, At Large runs the gamut from the swangin' "Caravan" to the sanguine "I Don't Care What it Is That You Did When You Lived in Fort Worth," highlighted by two booths' full of musical guests (yes, that's the real Johnny Bush). While not every cut will make the Waffle House jukebox, the 24-song collection is consistently good, with nary a stinker in the bunch. In all, a fine plug of musical chaw from one of Austin's more affable wiseasses -- a slightly off-kilter C&W sumbitch who never fails to take his music less than seriously. That wry wink can obscure a more important fact, though: Hurd and his eight-piece band comprise one of the tightest outfits in town. At Large is the proof. 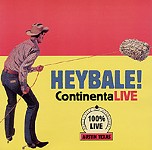