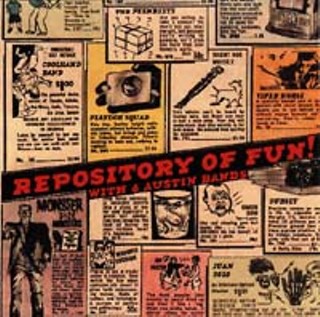 Between the death of vinyl singles and the proliferation of self-released CDs lies the compilation album. Boasting a long local history of good grassroot sampilations, Austin's KVRX set has produced some memorable ones of late, including L'Austin Space, Rotating Parts, and going back to '95, Peek-a-Boo's Bicycle Rodeo. Throw Repository of Fun on the same thankless scrapheap. With six scraggly little Hole in the Red Eyed Flamingo bands each contributing a trio of songs, Repository spazzes out like an elementary school playground, rocking gleefully modern like only a noncommercial radio station can in these times of moribund mass media. Nevertheless, Viper Horse snorts and kicks in classic 101X fashion ("Friendship"), while Coolhand Band's assuredly shoestring production values can't mask a certain Trippin' Daisy happy bleat ("Out the Freaks," "Chocolate Box"). Chepo Peña's Juan Solo project even manages to sound like Matthew Sweet on one tune ("Starving for Affection"); another, "This Machine Accepts Tokens Only," moshes tautly à la Toadies. Subset's "Disarmament" could be the best song here, a tight, two-minute summation of everything post-Sonic Youth. Only Playdoh Squad and the Peenbeets rock somewhat more Brady Bunch than the Partridge Family ("Drive Like Megaforce," and "Her Underwear," respectively), but that just ably mirrors this segment of unexplored, often ignored Austin music.