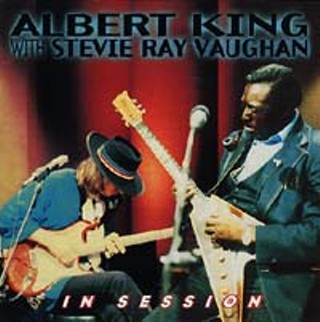 One of the more revered moments in Austin musical lore is the night in 1975-76 when a skinny young kid known back then as "Little Stevie" got onstage at Antone's, then newly opened on Sixth Street, to jam with blues master Albert King. Consequently, the two blues slingers were well acquainted when they reunited on Canadian TV in late 1983 for In Session. The resulting album is noteworthy if for no other reason than it brings together the two most influential blues guitarists of the past 30 years. King, long the blues colossus who had influenced several generations of blues players, was in tip-top form at that point, while Vaughan, having already forged his now-familiar style that often quoted King note-for-note, was on the cusp on stardom. The timing of this recording was perfect. If you're a fan of twin guitar blowouts, then you'll be in hog heaven from start to finish. This set is King's baby all the way -- his songs, his vocals, his band -- with Vaughan taking a turn on "Pride and Joy" and sparring brilliantly with his mentor. The two men are definitely having a good time here, bantering between songs and working out on the likes of "Stormy Monday," "Blues at Sunrise," "Overall Junction," and a playful, funky "Matchbox Blues," and while it's a shame it took so long for this set to be released, it's been well worth the wait.