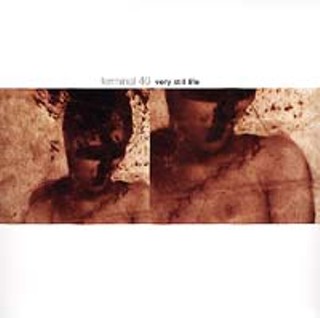 Even if the tracks on this third outing from Austin's post-industrial juggernaut weren't up to snuff (pun possibly intended), they'd still be due a big fat goat carcass bonus point for the album's wonderfully creepy packaging. Ten freestanding lyric cards, each bearing their own chilly, horizontal strip of artwork, and a nifty gatefold sleeve make this a near collectible in terms of presentation. Of course, not only are the tracks up to snuff, they're the band's best work since their first outing some seven-odd years back. Just to touch on a few highlights: "Dear, Dear Dead Friend" finds the band out Sisters of Mercying themselves, while "Anodyne" is the sonic equivalent of putting your paw in a Cuisinart, and "Now There's Only Tomorrow" is as close to the mottled black-skin dangle dance as any you're likely to hear. Got hate? Corey Wilson's stripped down, sulphur-choked vocals do, in spades, as does Eric Gustafson's crank-happy guitar slashings, which manage to bludgeon and fellate you simultaneously. Kyle Findlay's eerie, occasionally orchestral programming and synth work are severed-head and battered shoulders above most of the band's proto-goth/industrial contemporaries, and skineater Keith Hirschman's flagellating drumwork is bound to be tremendous boon for the manufacturers of Extra Strength Tylenol. On the whole, Very Still Life is something akin to discovering the subtle pugilistic joy of Reduction via Smashing Things Up: angry, scary fun for Ritalin kidz on a sad Sunday smack bender.