Exposing the Subgenius; Austin clubowners gather to mourn the Steamboat; Earthpig moving to the taxicab center of the universe; and Jonathan Richman breaks down. 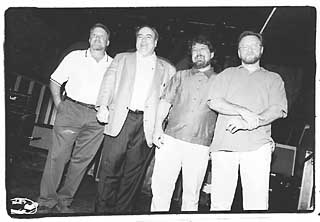 If you've lived in Austin for any length of time, you've probably run across mention of the Dallas-based Church of the Subgenius, whose card-carrying members have included Devo, George Clinton, and the now-excommunicated David Byrne (for allegedly stealing their ideas in his film True Stories). Locally, there have been bands directly linked to the Church, such as the Rudy Schwartz Project, as well as a number of songs and/or artwork on albums ranging from the Wannabes to the Butthole Surfers. Now, however, the Church's avatar J.R. "Bob" Dobbs (mascot of the Chronicle's first music column, Margaret Moser's In One Ear) is on the brink of receiving recognition beyond any that had been imagined, as he's currently struggling for first place against Geraldo Rivera in Time magazine's "Fraud of the Century" poll -- with stalwarts like Orenthal "O. J." Simpson, Donald "Stinky" Trump, and "Dr." Laura Schlessinger all trailing so far behind the two as to be no threat at all. If you've ever derived inspiration from the Church's irreverence and preaching that man must have "slack," go to www.subgenius.com, which will quickly send you to Time's polling site, so you can vote for "Bob" and show the world how powerful he is. Even if you find Subgeniuses to be mewling, self-aggrandizing smartasses who only talk to chuckle at their own pseudo-cleverness, vote for "Bob" twice to show the world what a fake he is.

"Number Two, step forward please," quipped one photographer as several Austin clubowners formed a photo-op "lineup" at Steamboat last Monday evening. "Hey!" snapped back former (future?) jailbird Clifford Antone. "That's too close to home!" The photo shoot wasn't nearly as impressive a display of solidarity as Steamboat's Danny Crooks had hoped for, with one expected clubowner late returning from a meeting in Dallas and another tied up with Yom Kippur, but Antone was seen afterwards consoling Crooks on the impending loss of his Sixth Street venue (flip the page for our pictorial essay) and offering help. "He said I could do some 'Antone's Presents Steamboat' shows," says Crooks, who has similar plans for Halloween and other large shows at the Bon Temps Room above Jazz ("It's bigger than Steamboat and there's five stalls in the girls' bathroom!" he boasts) as he waits to determine where the club's new permanent location will be -- besides the Lakehills Theatre, he says he now has a lead on Fifth Street in the entertainment district. Things have been rockin' at the 'boat in its final days; while Bob Dylan (who thanked Jupiter Records onstage at the Erwin Center for including him in their Chronicle ad) didn't show up to join Charlie Sexton at the club, Sandra Bullock found herself staring down the barrel of a four-foot penis at last week's Uranium Savages performance (no, Enquirer readers, it didn't belong to Bob Schneider -- it was a prosthetic), and Eric Johnson showed up on Tuesday night, though Crooks admits he doesn't know if the guitar-slinger got onstage, bitching that, "He said he couldn't get out of the studio to do a show, so I wonder what he was doing here for two hours!" Coincidentally enough, people have been asking Crooks if his "special guest" at the club tonight (Thursday) has the initials "E.J." to which he's been replying, "Yes -- depending on how you look at it!" (Would that be Joe Ely with David Grissom perhaps?)

In other club openings and closings: "First they got rid of the original music, then they got rid of all the music," tsks Paul Minor, former booker for Dick Clark's American Bandstand Grill. "Now they've loaded up and moved back to Bev-er-ly" [Hills, that is]. Representatives for the restaurant-cum-live-music venue couldn't be reached for comment, but the Grill now sits stripped and empty with a "For Sale" sign in front. Minor is currently booking the Texas Music Saloon across the street from Katz's, which opened this week and for which Minor was "scrambling" to get a band for Saturday.

The Pig in the Apple's Mouth

Say goodbye to Adam Bork, aka Earthpig, the next in the raging stream of Austinites on their way to the Big Apple. Earthpig's final show will be at Flipnotics this Saturday, and he's been practicing for life in Queens by driving an Austin cab for the last few months. "I might play up there," admits the 'pig, who's been recording with Li'l Captain Travis of late for an upcoming release, "but I'll change the name." Maybe that way he can avoid running into other former locals -- a Herculean task, apparently, if Chron Music editor Raoul Hernandez's experiences there last week are any example; besides spotting Tim Stegall in a crowded club (and managing to get out without being seen himself), a stop to rest on a bench in the Museum of Modern Art found him face to face with the rhythm section of Spoon. As it turns out, the band, showcasing at the CMJ music conference along with other locals like Silver Scooter, Knife in Water, Trail of Dead, and Tawyna LoRae, has a new 10-song album in the can, as well as a brand-new fourth member in the person of keyboardist Brad Shenfeld, formerly of the proto-Spoon Alien Beats. The band has also finally recorded a long-proposed double-A side 45 sneeringly dedicated to their former Elektra A&R man Ron Laffitte, hoping to release "Laffitte Don't Fail Me Now"/"The Agony of Laffitte" on Omaha indie Saddle Creek Records, but have to consult their lawyers (they might want to talk with John "Vanz Kan't Danz" Fogerty's barrister as well, while they're at it). Is this kind of bridge-burning attitude the reason the massive 3-CD Matador Anniversary sampler doesn't include a single cut from their former darlings Spoon? "No," insists Matador's Deborah Orr, "we all still really like Spoon." Apart from Guided by Voices, the collection only represents acts currently on the label.

Jonathan Richman got to sample another of the special experiences unique to Texas by having his tour vehicle break down in the small town of Snyder, Texas, stranding him six hours from his Monday night Continental Club show, the first of a four-night run. Rather than arrange for repairs on the spot, the decision was made for Continental owner Steve Wertheimer to send off a car trailer that Jimmie Vaughan uses to cart his hot rods to auto shows and pick up Richman, drummer Tommy Larkins, and the vehicle. "I know more mechanics in Austin than I do in Snyder," cracked Wertheimer. According to Larkin, who was seen at the bar talking with buddy and former bandmate/ Friend of Dean Martinez Bill Elm, Richman is disappointed that arrangements couldn't be made for a planned Austin City Limits appearance while he was in town for the Continental gigs, but ACL's Terry Lickona says plans are already under way to fly the performer back before the season's taping is over. That means we'll likely get to see the duo again soon, but you can still go cheer Richman up by attending his last performance tonight, Thursday.

Tom Petty packed the Erwin Center last week, despite being two days late to play with Bob Dylan, and concluded his encore with a version of Van Morrison's "Gloria." It was an extended take on the song, but for anyone who was in on the last days of Liberty Lunch, it seemed to go by in mere seconds. Still, it was lovely, and I would've cried if a Statesman reporter hadn't taken all the napkins at the green room buffet because he'd forgot his notebook... Seed found out this week they had more in common with Sonic Youth than they thought, when their blue, 1985 GMC Suburban full of equipment was stolen off the streets of Austin. The band keeps varying amounts of gear in the van at most times, says member Dean Truitt, but the crooks "got us at a particularly ripe time." (Call Truitt at 451-6126 if you have any leads.) On the positive side for Seed, they have label interest from several sources, with MCA flying the band out to L.A. and an ASCAP showcase in New York both coming up in the next few weeks. "It's a good thing," mopes Truitt, "that we were planning on renting equipment anyway"... It's outlaw country at Stubb's this fall, with Willie Nelson on October 7, Kris Kristofferson on the 17th, George Jones on the 22nd, and Waylon Jennings still a possibility. "I guess you could call Public Enemy outlaws too," jokes owner/booker Charles Attal, who adds that after the outdoor stage shuts down for the season following their Meters show on November 5, "it should be a good winter for La Zona Rosa." Not that things will be all quiet around Stubb's during the cold months; demolition should start in a few weeks towards raising the new Liberty Lunch. Wonder if the cops will be standing by the bulldozers with dB meters?... Drummer Terry Bozzio phoned from the local WWF show to complain that though his kid has gotten him hooked on the TV version ("It's like Dynasty -- you want to know what's going to happen next."), he was disappointed in how cheap the traveling edition is, though he says most of his favorites except native Texan "Stone Cold" Steve Austin were there. Bozzio has just returned from a solo tour and is taking a short breather before heading to Europe on Friday for another month of shows, adding that he's working on a big future Austin project involving several legendary percussionists at the One World Theatre. Let's hope it doesn't involve Bozzio and Sheila E. trading epithets and piledrivers to the accompaniment of a tirade by Vince McMahon...