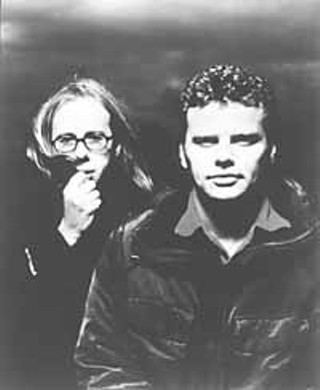 "We have a party on the line."

This from the breathy, disembodied female voice on the other end of my cordless Sony. Static skitters in between the syllables and I have to check myself, unsure of what was just said. A party? For me? How lovely. You're too kind.

Instead I murmur, "I'm sorry, I can't quite hear you?" aping her ethereality with some of my own.

More forceful, this time, the AT&T apparatchick reiterates: "We have your party on the line. Hold, please."

Ah. I see. And then the rolling, vowel-thick Mancunian accent of Ed Simons, one-half of the Chemical Brothers, England's cheerful answer to North America's penchant for ramming blunt objects up its collective pop-music bum, comes on the line and briefly flummoxes me. Is this the tall, dark-haired one or the short blond one with the perpetual Prada Blu-Blockers stylishly affixed? No matter, really. Together the pair has lovingly savaged the late 20th-Century electronic-music scene with a triptych of mind- and booty-altering albums, netting in the process a Grammy, a Mercury, and god knows how many drooly accolades from damn near everyone with a pair of speakers and a pen.

For the record, though, this is Simons, the tall, dark one. Along with partner Tom Rowlands, he has established the nascent Big Beat scene in their native Manchester, a techno-house hybrid comprised of walloping beats and roiling collages of sound that, from its inception in clubs like Brighton's Big Beat Boutique, has almost effortlessly made the sojourn stateside. Along with the master-beating antics of fellow Roland 303 headcase Norman Cook, aka Fatboy Slim, the Chemicals have proven that, contrary to accepted recording-industry notions, electronic dance music need not have vocal hooks (ô la the Prodigy) to hook the masses. A pair of Technics and an ample supply of sequencers and old vinyl is enough to get the party started. And, of course, it's also fine for backing automobile spots on television.

Needless to say, the Chemical Brothers are poised ... again! ... to take the Yanks by storm. It's happening already. "The first band I really remember loving was the Jesus and Mary Chain," allows Simons, "which now I'd probably find a bit heavy-going, but at the time it was really amazing. I was a bit young to go to the gigs, but all those stories about the 20-minute concerts and the riots I just found exciting."

"After that it was hip-hop," he continues. "Public Enemy, Schooly D, that stuff. Then, for a while there, back in 1988-89, all I wanted to do was go out to clubs and hear house music and try to find records by [Detroit techno pioneer] Derek May. That period was the time when I really discovered that, yeah, this was the music I really liked."

Simons and Rowlands met initially, like all decent British musical revolutionaries, at university, Manchester Polytechnic in their case. Not quite the arty background the Clash had, but still, close enough for rock & roll. After immersing themselves less in their studies than in the burgeoning acid-house scene and ingesting plenty of Ecstasy to get the all-important creative huggy-ball rolling, the pair decided to unite and begin DJing themselves.

Eventually, in 1992, the now-out-of-print track "Song to the Siren" was released under the moniker the Dust Brothers. While this initial foray into the dance music fray was wildly successful by all accounts, one party who was not happy was Los Angeles-based indie producer team the Dust Brothers (who helmed the Beastie Boys' Paul's Boutique, among others), who rightly felt the names were just too similar and tossed a cease and desist order down Manchester way.

Chastened, Simons and Rowlands hastily retitled themselves the Chemical Brothers and were on their way, flushed with mounting excitement over their widely hailed DJ skills as well as a series of rollicking EPs ("14th Century Sky," "My Mercury Mouth") that garnered them attention both from the notoriously fickle British music press and Stateside critics. Back then, though, it was all about playing live on a Saturday night to a gaggle of luvved-up and besotted dance hooligans in one dingy one-off club after another.

"I just love watching people dance," enthuses Simons. "I love the whole thing about buying a record on a wet Tuesday afternoon and saying, "Well, that's good, I quite like that record,' and then playing it out on a Friday night at three o'clock in the morning at some mad club and people are going crazy to it. There's no better feeling than that, the feeling that you've recognized something in a piece of music and then you give it some exposure and it goes off. Just watching people lose it, that's the best feeling in the world. That's what it has always been about for us."

In June 1995, the Chemicals' first full-length LP, Exit Planet Dust, soared up the British music charts in about as much time as it takes to fall in a K-hole, and even sold an admirable 300,000 over here. This, of course, was before Liam Howlett and Keith Flint pried open the golden gates of American musical commerce for electronica with the Prodigy's record-selling "Firestarter" single a year or so later, making the Chemicals' feat that much more remarkable at the time.

Piling up kudos while manning weekly spots at the legendary Heavenly Social club ... where they forged their nascent big beat sounds into scythe-like respectability ... the pair eventually hightailed it back into the studio, barred the doors, and emerged in early '97 with Dig Your Own Hole. The CD featured the amazing, vitriolic spleen of guest vocalist Noel Gallagher on "Setting Sun," an alt-radio staple in America and equally huge everywhere else. It was to that point their finest moment, redefining not just a musical genre but also an industry: Look, ma, it sells!

"There was this quote I read in a magazine," says Simons, "in which the general public had chosen their top 100 albums of all time and someone had listed Dig Your Own Hole at number 18 and the comment was that "this record is easy to admire and hard to love.' That really struck me, that she liked the album enough to vote it as her favorite of all time, but the way she described it bothered me. I think one of the things at the back of our minds from then on was making a record that was easy to love. Which is quite a lofty ambition."

With last month's release of the Chemicals' third CD, Surrender, Simons' ambition has been fulfilled. A kinder, gentler Chemical, the altogether more cheerful vibe winds its way through the album, culminating in the heart-heavy vocals of Mazzy Star's Hope Sandoval on "Asleep From Day." (Says Simons: "Mazzy Star is a band that we used to listen to all the time a few years ago when we were driving around in our cars. -- We just thought it would be brilliant, this very powerful, emotional voice.")

Not that they've mellowed ... far from it. Surrender is awash in neo-psychdelic big beat shock troops, notable other guest appearances from Noel Gallagher on "Let Forever Be" and New Order's Bernard Sumner on the aptly titled "Out of Control." ("Bernard Sumner is a total hero to us. The things that he did in New Order and Joy Division have influenced what we've done and he's made music that we both totally love," says Simons.) It's all of a piece, but what a piece it is: sticky with fat, thudding beats, topped with spiderwebs of gooey caramelized pop synthetics. A chemical dessert.

Asked about this fresh and frothy approach to the new work, Simons says, "We never have a big master plan when we start making records. We didn't have any concepts or any framework. A lot of people start making records and they've got some big idea that it's all going to revolve around. We've never felt that we have a sound that we've got to keep making or that we've got to keep turning over, and I think that's sometimes detrimental.

"When we started making Surrender, we just shut the door in the studio and began making sounds for the sake of making sounds. We bought some old gear and we just recorded DATs full of us playing around. It was synthesis for the pure sake of enjoying that and not thinking about how it might fit into a song."

The Chemicals aside, electronica has made only sporadic dents in pop music here in the U.S. It's hard to get all the party people together in one spot when 20 Englands fit into your country. Simons has his own opinions. "I don't know what people worry about, you know?" he says. "We go all over America to big raves, big clubs, there are a lot of people into dance music, and I don't think you're going to get any bigger than that."

"There are [U.S.] places that are every bit as into dance music as they are in any bit of England or any bit of Europe, and really, this whole electronica revolution that was going to happen ... that was not something me and Tom wanted to happen. We didn't want the only music you'd hear on MTV or the radio to be dance music. That doesn't interest us."

Still, Simons is quick to point out that things have changed. There have been plenty of complaints from Ibiza-wearied U.K. stalwarts moaning about the death of dance music in the U.K. of late, a state attributable as much to overexposure as to anything else. After all, the best way to kill the underground is to drag it out into the light, and the U.K. scene has been rather brightly lit for going on 10 years now.

"People talk about a decline and the lack of excitement these days, but I think it's just people getting older and becoming journalists and starting to write about it," Simons says with a chuckle. "As far as the clubs, we went to one called Gatecrasher about six months ago and it was fantastic. There's still things going on, you know, it's an ever-mutating scene. There's always something else coming up, whether it's trance or speed-garage or big beat ... it's just very exciting the way it keeps moving on and on."

So where will Simons and Rowlands be five years down the road? "Bitter old men," Simons says. Then he checks himself and continues, "No, I think we'll be making records, whether or not there will be an audience for it is another matter entirely. I think everything can coexist. At the same time, there's that old show Space 1999 where you thought, oh, that's what it's going to be like, and then here you are in 1999 watching some shite band, you know? Electronic music isn't going to sweep the world and rule out rock music, you know, but still, there's room for change here and there. And, you know, that's what we're doing."