Scavengers of the Vast Wasteland 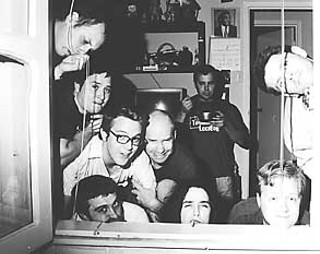 You don't have to wade too deep into the Op/Ed section of any newspaper to find some egghead attributing our civilization's decrepitude to the ever-shrinking attention spans of today's youth. Then there's ADD -- Attention Deficit Disorder. It's all the rage. But what about the positive effects of having a short attention span? After all, express lanes, remote controls, and instant oatmeal didn't spring from the turgid discourse of policy wonks. Austin's Brown Whörnet is a band that prolifically encapsulates all that is good about not spending too much time on a single idea. The seven-man, one-woman collective hopscotches their way across musical boundaries like a barefoot kid on hot pavement. Whether they're riffing on punk, metal, funk, jazz, film scores, or even klezmer music, Brown Whörnet attacks each passage with a vociferous intensity that seldom fails to keep an audience at attention.

Surprisingly, this schizophrenic amalgam of musical energy has its roots in the sleepy East Texas town of Nacogdoches. While attending classes there at Stephen F. Austin University, guitarist/bassist Jimmy Burdine began playing with original Brown Whörnet guitarist Chef Poonstick (full disclosure: Burdine also plays bass for my band, the Peenbeets). After getting their schooling out of the way, Burdine and Poonstick made the trek to Austin and began practicing with trumpeter A.J. McClure and drummer XSP. According to Burdine, his guitarist counterpart had known most of the guys from high school in Houston. Shortly thereafter, the freshly named Brown Whörnet played their first show -- at the old Antone's on Guadalupe, 1993. Future vocalist Stin-G was in the audience that night.

"I longed to get up onstage with the band," says G, "but I just didn't think that was appropriate."

"You should have," retorts Burdine. "We needed somethin'."

Indeed, a vocalist bum-rushing the stage would've been entirely appropriate during Brown Whörnet's early days. Utilizing a free-form, jam-oriented approach, the band initially set out to cover the entire musical canvas with the biggest, weirdest noise possible, even if it meant sacrificing the benefits of concision.

"We used to try to do everything, but now we don't try to do that so much," says keyboardist RUN PMS, who also joined the band shortly after the Antone's gig.

Brown Whörnet's penchant for quick change was further cultivated by their extensive use of four-track recording.

"There's a whole closet full of four-track tapes we did," says XSP. "A lot of original compositions where one person played all the instruments were done on four-track."

The band's four-track origins are best summarized by 1996's Value Pack, a sprawling two-CD/one-cassette collection that features, among other wild and stylistic musical variations, guest appearances by local jazz stalwarts such as Tony Campise and Freddie Mendoza. Featuring titles like "Fill the Toilet With Turds" and "The Pink and Fleshy Skull of Ian Moore -- Tableaux I," the Value Pack was also noteworthy for its unconventional packaging. Each cassette came individually "decorated" with a variety of found objects. Mine had peanuts glued to it, but that was only the beginning.

"We got a piece of Scotch tape and pressed it on a line of ants and stuck that with the ants half-alive onto one of the cassettes," remembers Stin-G. "We also glued Band-Aids, cigarette butts, and sand on the cassettes."

"I put a big clod of dirt in one," adds McClure.

"The Value Pack is really more of a prequel than an album," he explains. "We really had to be selective just to get it down to three and a half hours."

That doesn't mean Brown Whörnet has spent its time holed up in garages laboring over their four-tracks. On the contrary. Besides keeping a high profile on local stages, the band's tour dossier is quite extensive -- impressive given their lack of label support. In fact, Brown Whörnet have played just about everywhere in the continental U.S. at least once. This pugnacious desire to swallow miles is not what you'd expect from a group whose 1996 virgin tour began with the theft of all their equipment before they even played a single note.

"The only thing they left were guitar picks and drumsticks," laments Burdine.

Instead of slouching back home, the band called ahead to each venue and managed to borrow or rent enough equipment each night to finish the tour.

"It was surprising how many shows we had where someone found me a trumpet," recalls McClure. "There was one night where I had to sit there and watch them play, so I just sat at the bar and drank Brass Monkey."

Once back in Austin, a number of local bands organized benefits to help Brown Whörnet replace the stolen equipment. The cross section of genres represented by the participating acts -- jazz, hip-hop, punk -- was quite impressive, says Burdine, but not as impressive as how many benefits were held.

"We had so many benefits, I would've thought we were annoying if we weren't us," quips Stin-G.

Another road-related tribulation came when Chef Poonstick decided to leave the band in the middle of a 1997 tour to "do what he had to do," according to Burdine. Once again, the band's piecemeal ingenuity was put to good use. Burdine switched from bass to guitar and taught three band members how to play various bass parts in the van. For some songs, Burdine even played the guitar and bass simultaneously. Fortunately, Brown Whörnet had two new members on deck, clarinetist Carolyn "The Squeak" Cremona and saxophonist Gaseous Clay. When Burdine decided to stick with the guitar, the band hired former Big Horny Hustler bassist Jewelry to take his place.

"I was afraid they'd stop liking me when I joined the band," says Jewelry, "but we're still really good friends. With all the other bands I've been in, once I get in the band, they start to hate me."

"I'm the one they've grown to hate," laughs Cremona. "I'm the only female and they keep trying to impregnate me!"

As the band incorporated its new blood, a surprisingly more refined end result emerged. Brown Whörnet still avoids playing the same set more than once, but today's edition of the band is tighter and well-attenuated to the hold-and-release dynamic of effective live performance.

"We've gotten more toward composed material as opposed to just jamming and recording and making jams into songs," says XSP. "There have been more intricate parts composed."

"Chef Poonstick used to be opposed to that," continues McClure. "He didn't like having too much structure in songs. He always wanted to have people just jamming. I liked it like that, too, 'cause I didn't have to learn anything. Things are easier when you don't have to learn."

"We still try and keep moments where things are spontaneous," says Burdine.

"Yeah," mocks Stin-G, "we have planned moments of spontaneity."

The fruits of this shift can be heard loud and clear on the band's latest, self-titled album. Released this spring, Brown Whörnet is expansive yet surprisingly manageable from a listener's perspective. Whether the band veers into speed-metal population control anthems ("Variations on the Pope"), Merrie Melodies-inspired lunacy ("Puffy Upper"), or Germanic S&M synthesizer pop ("Cutting Myself in the Mirror"), the album is always provocative and never laborious. Produced in part by Curra's Grill, the release even comes with a coupon good for Curra's "Brown Whörnet Special." The album may turn out to be the most noteworthy rock-and-restaurant partnership since Showbiz Pizza Place introduced us to the Rock-A-Fire Explosion.

Brown Whörnet's contributions to Austin's ever-burgeoning rock-and-film connection have also been noteworthy. The band's Halloween performances of music set to the silent film Nosferatu drew capacity crowds to the Alamo Drafthouse Theatre last year (the band plans to repeat the event this October). When Graham Reynolds of Golden Arm Trio decided to compose and perform a score to accompany the Alamo's showing of The Lost World, he called on Brown Whörnet to collaborate because, "it was a movie about big, huge dinosaurs, so I wanted a big, huge band to play the music."

Like any number of local music concerns, Brown Whörnet's individual members stay busy with a number of alter-ego side projects when the band isn't out lumbering about. Many of these ventures can be heard on "Brown Whörnet Radio" on the band's Web site (http://www.brownwhornet.com). Perhaps the most flamboyant is Soul People, a group that plays R&B-flavored love jams from the old school while their impeccably dressed "security force" guards the stage. Then there's B.L.O.T.O., an experimental four-track project where band members make up and record songs on the spot while inebriated. Levytikuss is a gay Christian heavy metal act.

"Our album's going to be called I Believe in You, Why Don't You Believe in Me?" cracks McClure.

Besides the current collaboration between Golden Arm Trio and Brown Whörnet, keyboardist RUN PMS is also working with the Trio's Reynolds to put together a symphony show with a 40-piece orchestra. The show, slated for late fall or early winter, will feature compositions from both Reynolds and PMS. And in addition to recording a new Brown Whörnet album, the group is also embarking on an East Coast tour with Daniel Johnston next month.

While most people tune out the consumption-oriented musical detritus that pummels our daily existence from every angle, Brown Whörnet sucks it up and spits it out in eight different flavors. Given their role as aural scavengers of the vast wasteland, being driven to distraction every few seconds may well be the band's strongest attribute. As Burdine so eloquently puts it, "Pretty much every band I've ever seen has influenced me somehow, even if it was just to show me what not to do."