Why Should Anyone Care Now?

Famous for their motto "Show up drunk, show up late, or don't show up at all," Doctors' Mob, along with other mid-Eighties local bands like Glass Eye, the Reivers, True Believers, Wild Seeds, and Texas Instruments, defined a short-lived musical movement specific to Austin, one forever saddled with the unfortunate moniker "New Sincerity." Emerging in the aftermath of both punk rock and New Wave, bar bands such as Doctors' Mob were neither, defined by loud guitars as well as their ability to pen songs of substance. They rocked, sure, but they were so sincere about it.

More than a decade later, few memorable albums remain (in circulation, anyway) as testament to the local music phenomenon, which is perhaps why Doctors' Mob reunited recently to celebrate the release of Last One in the Van Drives, a single disc containing the Austin quartet's two critically acclaimed, long out-of-print albums, vinyl-mostly Headache Machine (1985) and The Sophomore Years (1987). Not long after playing Liberty Lunch's farewell festivities, the band, guitarists/vocalists Steve Collier and Don Lamb, and drummer Glen Benavides (bassist Tim Swingle was a no-show in classic Mob tradition), convened at -- where else? -- a local bar to answer a question initially met with what can only be described as stunned silence: "Why should anyone care about Doctors' Mob now?"

"I don't know if they should," laments Collier, the Mob's vocalist and principal songwriter. "We don't sound like anything you hear on the radio now."

"But you hit it exactly on the head," enthuses Lamb. "There are people that have never seen us before, who after seeing that [Liberty Lunch] show, have gone on and on about how great it was, how much fun they had, and how there's nothing like that out there now. How many other bands could've opened for the Butthole Surfers, Hüsker Dü, and Meat Puppets all in one week, then opened for NRBQ two weeks later?"

"The whole idea of the band was to have these really melodic songs that you played really heavy," explains Collier.

"I kinda dug that the band wasn't very arrogant," quips Benavides. "I liked being able to laugh at yourselves, too. A lot of people can't."

Formed in the early Eighties by the three principals and original bassist Jimmy Doluisio, the group took its name from an almanac, an article about the first American riot, dubbing it the Doctors' Mob of 1728. From day one, the local quartet became one of the most popular rock & roll bands in Austin.

"We did our first gig at the American Legion Hall opening for the Big Boys," recalls Collier. "Our next show was opening for Chris Stamey at the Continental Club."

"The Continental Club used to do New Wave bands on Tuesday nights," injects Benavides. "We got regular gigs there."

"That was when it first really started feeling like a scene to me," continues Collier. 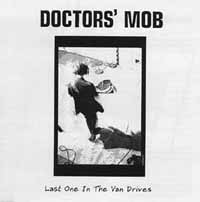 "I think seeing us live was more like seeing friends at a party," posits Lamb. "It wasn't like seeing a band in a club. You were in on the joke, and you were having fun with the band. I think that's what really came across with us. Nobody ever thought about our making records when we started."

"It wasn't until I heard the test pressing of Headache Machine that I realized there was really something there," says Benavides.

"Chris Gates was completely casual. He used to practice with Poison 13 at the Doctors' Mob house. At Europa, where we recorded, they were actually wiring the studio as we were recording."

"Typical Doctors' Mob," snorts Benavides. "They were building the studio while we were recording our debut."

"The whole album was done in two days," points out to Lamb. "Chris had the right attitude. He understood what we were doing."

On the tour that ensued, bassist Jimmy Doluisio walked out on the band after a gig one night. The group canceled the last four gigs of the tour and came home with, according to Lamb, their "tails between our legs." The Mob soldiered on with a second album, Sophomore Slump, now signed to Relativity records with what Lamb now describes as "one of the best independent record contracts ever."

"We had a list of producers to pick from when we signed to Relativity," Collier remembers. "Bob Mould, Tommy Erdelyi ... [We] were so excited about being signed to Relativity and having Tommy come to town to do our record. We thought everything was going to work out."

"We made a really great demo for the second record with Mike Stewart," says Benavides. "We were driving around listening to it and thinking, 'Just wait until Tommy Erdelyi gets through with this! It's going to be great.'"

"Then Tommy came in, and he wasn't terrible or anything, he just went by the book," says Benavides. "He didn't put any effort into it."

"He just mixed a professional record and put it out," explains Collier. "He was in a hurry to move on to his next project. No matter what he would say, we would just do it. We felt like since he was one of the Ramones, whatever he said must be right.

"When Relativity heard the record, they said, 'It sounds lame. Everything sounds overproduced. We need to redo it.' And we were like, 'Whaddaya mean? You paid Tommy Ramone to do it.'

"So we're waiting for the second record to come out, and everyone had days jobs, like pizza delivery, waiting on tables, working in record stores. When the label said we had to re-record, everything got delayed; the record got delayed, and everyone was totally broke. We were doing mini-tours around Texas trying to stay afloat financially."

The two tours in support of Sophomore Slump convinced everyone in Doctors' Mob that rock & roll wasn't a glamorous life after all. To make matters worse, by that point, the band's A&R representatives had both quit the label. Those left in charge of the Austin quartet seemed to have no idea what to do with the Mob, sending them out on tour in January, and later scheduling gigs in Minnesota and Iowa.

"They'd always send us up north in the dead of winter," grouses Lamb.

"Until the very last year, we never stayed in a hotel room," injects Collier with a mixture of laughter and horror. "We just stayed in the van outside the shows. That really got to be a strain. Some drunken person would always take us home. We didn't know that always brought out the fringe element. Some drunken psychotic would always say, 'Come stay at my house.'"

Doctors' Mob was always famous in Austin for road horror stories -- like the time they had their van stolen in New York, leaving them with only the clothes on their backs.

"We were told the van was okay on the street," chuckles Lamb. "That it was a good neighborhood. We came to find out it was a block from Harlem."

"On our last tour," recounts Collier, "we blew the engine on the Lisa Marie, our Dodge van, in Nashville. We ended up being there for a whole week!"

Collier charged a $1,200 motor to his virgin credit card and the band set out for their next gig, this one in Louisiana. Again the motor died. Stranded 400 miles from home, the band was saved when Wild Seeds frontman Mike Hall drove down and brought them back home.

"We just abandoned the Lisa Marie by the side of the road," laughs Collier.

Yes, but why should anyone care about all that now?

"Everyone now is so career-minded," sighs Collier. "The whole idea of being in a band is pretty silly."

"I wish there was still a band like Doctors' Mob playing in Austin," says Benavides. "I'd go see them. I think it was pretty cool that people would go see the band and say, 'Well, what's going to happen tonight?'"

"We really did work on the songs and the music," Collier continues. "We weren't a joke band or a parody band at all, but it had a sense of humor in it."

"That's the essence of the song 'Why Should You Care Now?'" explains Benavides, referring to the tune from Headache Machine. "Laughing at ourselves for getting kicked offstage in Oklahoma City. 'Why should you care now if we don't? We'll just go back home. Fourteen dollars and four warm beers, 'Here you go you guys, see you later, thanks!'"

Doctors' Mob's complete recorded history is now available on Last One in the Van Drives, barring an early version of one song on a local anthology. The master tapes for Headache Machine had been in Lamb's possession for nearly 15 years, but had deteriorated beyond repair. Relativity had also lost the masters for The Sophomore Years, so the album had to be remastered from still-sealed vinyl copies of Lamb's. Remarkably, after digital cleaning up by Jerry Tubb at Terra Nova, it sounds very clean, full of sparkling raw energy with well over half a dozen songs still sounding just brilliant after all this time.

In these days of corporate rock, when so many bands take themselves so seriously, maybe we need Doctors' Mob after all. They were, and are, an integral part of the Austin music community -- Benavides going on with Buick MacKane, Collier in the Sidehackers, and Lamb managing Waterloo Records. There'll be yet another reunion show September 24 at the Hole In The Wall, so show up late, show up drunk, or don't show up at all.