Neither Fish nor Fowl 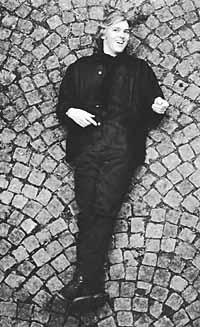 "The fact that I've mentioned fish or aquatic life forms maybe four times in my career has indelibly marked me as a fish obsessive," sputters Robyn Hitchcock, managing to sound at once put off and amused. He's responding to my offhand comment that there are, in fact, no references to fish, bodies of water, drowned sailors, or other aquatic matters on his new album Jewels for Sophia, and it's clearly a subject that has reared its ugly fin before.

"A guy rang up yesterday," recounts Hitchcock, "and asked did I realize I'd mentioned bees three times in my career, so now I'm also a bee obsessive! What are you supposed to sing about -- rivets? The lyric police are out and prowling!"

The fact remains that very few songwriters, barring those who expect to find fortune by tapping into the currently underdeveloped sea shanty market, mention fish at all, nor birds, nor bees, opting instead to content themselves with repetitive themes of love, lust, or some variation on the gaining or losing of one or both. Hitchcock, who's closing in on a quarter-century of defying rules on what kinds of songs he's supposed to write, is a welcome exception.

Since he formed the Soft Boys in the mid-Seventies, Hitchcock has combined a Beatles-minded pop sensibility with quirky subject matter to form a career that has produced an incredible number of three-minute musical masterpieces -- though not always without opposition. The Soft Boys, appearing as they did at the dawn of British punk, were often damned (no pun intended) for daring to have the "wrong" influences (such as the Byrds) at a time when, supposedly, the most important thing for a new band to do was to follow its own star.

"Again, there was a police," recalls Hitchcock. "There was a New Wave police, and [a band's influences] all had to come from three or four approved sources."

Hitchcock never gave up on writing and performing the kind of songs he liked, however, even with the breakup of his band and into a long, label-hopping solo career. And to him, a song about bass or bream is no more unusual than a song about a beautiful girl -- he writes those very well also.

Fortunately for Hitchcock, his perseverance has paid off into the turn of the century, as he has netted a decent core crowd of fans who continue to support his work in a time when musical careers seem increasingly subject to sudden rises and falls. For a cult-level performer with an extensive back catalog, the percentage of compositions the songwriter has recorded that are currently available on CD is astonishingly high; Hitchcock reckons only a few recent albums for A&M are out of print. He's also been the subject of a recent documentary/concert film by Academy Award-winning director Jonathan Demme called Storefront Hitchcock and has an online "museum" at http://www.robynhitchcock.com. Best of all, he's left alone to write and perform the sort of songs he likes without debate.

"No one comes 'round to the hotel room and says, 'Listen, I don't detect any dub reggae influences in your work. Jump out the window now!'" he relates happily. "In a way, in the Nineties you can do what you want. There's room for everybody to chug away in their own individual corner and there's usually some kind of market for it. Even progressive rock, and that was one of the forms most vilified -- and rightly so -- by New Wave."

Hitchcock chugs away in more corners than usual with Jewels for Sophia, recorded with a number of different musicians, including members of the Young Fresh Fellows and R.E.M., as well as ex-Soft Boy/Katrina & the Waves guitarist Kimberley Rew.

"I found them in the various cities they were in, booked the studio time, very briefly showed them how the songs worked, and we were off," relates Hitchcock.

The result is a more unevenly paced album than Hitchcock fans are accustomed to, but one which nonetheless delivers the goods, from atmospheric tracks like the title tune to melodic rockers like "Viva! Sea-Tac," which the Seattle Chamber of Commerce might well take an interest in until they catch the chorus line of "They've got the best computers and coffee and smack."

On this particular visit to Austin, Hitchcock is promoting Jewels in the midst of a new experience, a package tour ("Sort of like the Sixties when you had Freddie & the Dreamers and the Jimi Hendrix Experience touring together," he explains with little regard for reality), in which he'll be sharing the bill with the Flaming Lips, Sebadoh, and others. One might expect the equally eclectic young Oklahomans in the Lips to have assaulted their current labelmate by now, dragging him into some hidden subterranean studio with the intention of writing and recording a vast, twisted symphony with the eccentric Brit, but Hitchcock says that so far, he's not had the chance to get to know his tour cronies.

"Everybody's too busy trying to work out their own logistics, so I've been left in peace so far."

In any case, the Lips' latest predilection for string-laden lush pop should be finely paired with Hitchcock's catchy ditties, usually linked together with the Dylanesque storytelling patter he's demonstrated to various extents in previous Austin appearances, most notably at a Cactus Cafe show where the songs actually took a backseat to the elaborate, deceptively nonsensical tales spun by the artist between them.

Mention of the Cactus Cafe prompts Hitchcock to ask a desperately important question in anticipation of his visit to our fair city:

"Will the bats be coming out?" he wonders.

Hmmm, bats, bats... Perhaps it's time to pull out the Hitchcock discography and check for references to flying mammals. We may have spotted another obsession!*