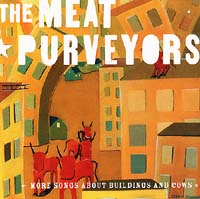 "Wacky" isn't quite the word one should use to describe the Meat Purveyors. They're not Lucille Ball, Chris Farley, or Ween, though one suspects they might enjoy such comparisons. This Austin quartet has a unique sense of humor that is certainly out there (somewhere), and on their second Bloodshot Records release, More Songs About Buildings and Cows, it's hard not to laugh along. Concentrate only on their jokes and word play, however, and you might overlook their musical abilities -- missing the reason they're able to pull the whole thing off in the first place. Other bands have attempted to mix punk sensibilities with bluegrass, yet were not nearly as successful. TMP's combination of musical chops and mirth, along with a curious collection of cover songs and sharp originals, is both uncommon and a helluva lot of fun. Few bands are able to mix tunes from Bill Monroe, Daniel Johnston, Lou Reed, George Jones, and the Pocket FishRmen and not only make it work, but make it accessible. The idea of turning Johnston's "Museum of Love" into a bluegrass number is sheer genius on both sides of the coin. The band's original material holds up equally well, with guitarist Bill Anderson getting most of the credit for songs of wit and substance that singer Jo Walston succeeds in putting across with a sly wink and subtle yet appropriate earnestness. The inspirational chorus of the "Summer of '99," forcefully sung by TMP bassist Cherilyn Dimond, perhaps says it all: "I'm more man than you'll ever be and more woman than you'll ever get." Go, girls.