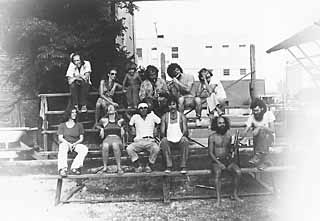 Liberty Lunch was always a magical place. From the first day we opened, December 6, 1975, the smell of Chef Emil Vogely's gumbo lured artists, students, city employees, transients, and the curious to this out-of-the-way former tortilla factory on West Second Street.

We discovered the name Liberty Lunch while scraping paint off the front of the building, learning about its early life as a diner staffed by School for the Blind employees. Over 100 years ago, Liberty Lunch was a wagon yard for people bringing their crops and wares to market, while across the street was rumored to be a gambling den. The red light district was a short walk away.

We could feel the lively ghosts and their approval of our crazy "food with spectacle" antics. Chef Emil initiated his Gumbo Cookoff, with his special Medusa's Headdress, made up of live squirming crawdads. Later, our Huevos Rancheros Cookoff, toasting the dawn with shots of tequila, got us in deep trouble with the TABC.

After the lunch rush, we would gather in the back yard, pass the peace pipe, scrounge recycled building materials, and slowly fashion our dream of a theatre. The stage out back was the forming grounds of what would become Esther's Follies, doing performance art on the roof while Shiva's Headband played below.

The first shows at Liberty Lunch were Bubble Puppy, 47 x Its Own Weight, the Point, and the start of the tropical "Big Bands" -- the Lotions, Beto y Los Fairlanes, and the Electromagnets. The open-air backyard stage with its funky, mismatched tables spoke of true Austin sensibilities, even down to the outdoor public bathtub and shower whose daytime usage got us in trouble with our neighbors at City Hall.

At first, the city of Austin tried their best to close us down. The building was condemned one month after we rented it, and bulldozers were dispatched to knock it down. Only a last-minute reprieve by Mayor Jeff Friedman and a friendly City Council kept Liberty Lunch open month-to-month for the next 23 years.

Liberty Lunch was the embodiment of the Austin dream -- where you could rent a cheap, abandoned building, gather all your artistic friends, and create a space that would have a profound effect on your lives and that of your community. Austin keeps nurturing its crazy, wayward entrepreneurial spirits. -- Shannon Sedwick & Michael Shelton