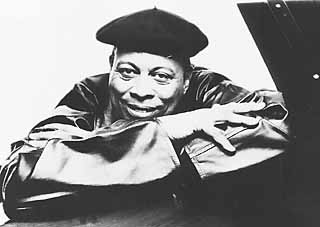 Like a summer storm, the piano playing of Jesus "Chucho" Valdés comes in waves. Amidst a thundering, sometimes furious hail of conga, batia, and trap drums -- locomotive Afro-Cuban rhythms -- Valdés pours down in thick, cascading sheets of ivory rain, unleashing gale force amounts of natural energy in an awe-inspiring display. Just as this musical tempest threatens to batter everything in its path to pieces, suddenly rhythms change, and a gentle mist of delicate notes falls lightly from the giant hands of the Cuban piano man. Back and forth these currents flow, raging one moment, relaxed the next. Like a tropical storm.

At a looming 6-foot-5 inches tall, his head shaved and a Cheshire smile affixed to his big round face, Chucho Valdés looks like he could almost command just such a rainstorm. The son of renowned Cuban pianist/composer Bebo Valdés, Chucho was born in Havana, 1941, and had already been playing piano several years by the time Dizzy Gillespie and a conga-playing friend of his father's, Chano Pozo, more or less invented Afro-Cuban jazz with the recording of "Manteca" in New York in 1947. Having helped fuse traditional Cuban music with American bebop as musical director of Havana's famed Tropicana Night Club in the late Forties, Bebo fled Castro's revolution in 1960, leaving the younger Valdés to continue his musical education on his own. In 1970, Chucho brought his father's legacy into the present by founding Irakere, a real "fusion" band, featuring Cubop renowneds-to-be Arturo Sandoval and Paquito D'Rivera.

"My life was always music," says Valdés by phone from a hotel room on the West Coast. Speaking in Spanish, his soft, slurred "S's" butting up against hard consonants like "M" and "B," Valdés, who still lives in Havana, says nearly everyone in his family played music -- mother, father, aunts, uncles. 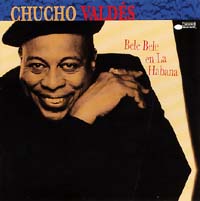 "I started playing when I was three," he says. "I learned to play by myself -- watching my father. I was a child when I met Nat King Cole. And Dizzy. And Sarah [Vaughan], Milt Jackson, Ray Brown, Buddy Rich. Imagine. For me, it was extraordinary. Super.

"When I was 16, I started playing in trios and quartets. All the young guys. Always practicing and playing. We played every Sunday. During the week, we all played at home. We practiced every day.

"It was everything. It was jazz, which I liked very much. But it was also African music, Santeria -- music of my people. Congo. But jazz mostly. We played bebop. Like a Latino Charlie Parker, Latino Dizzy, Bud Powell -- all those people. Monk. We knew all the stuff perfectly. We played in that style, but with Cuban congas and drums. The same thing, but with Afro-Cuban percussion.

Which he did to great acclaim. Often compared to Art Tatum for his ability to turn harmonic conventions inside-out at light speed -- those conventions being a complex mix of American jazz, European classical music, and Afro-Caribbean rhythms -- Valdés and Irakere ("equatorial forest") quickly found an audience on international jazz stages. In 1978, with their first album for Columbia Records in the states (fourth overall), Irakere even won a Grammy.

"I first came to the United States with Irakere in 1978," says Valdés, recalling his first night in New York. "Incredible. I got to know the musicians I most admired. The same night we debuted in the United States, at Carnegie Hall, Bill Evans played. Solo. McCoy Tyner played. Solo. Mary Lou Williams played. Solo. And Irakere played. That night, I got to know Bill Evans, who was one of the pianists I most loved in my life and also McCoy, who was also one of my favorites. My first night. I almost fainted that night. I thought I was dreaming." 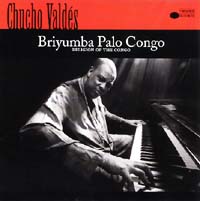 Despite the Grammy and another nomination the following year for Irakere's sophomore stateside release, as well as the fact that Valdés was fast becoming known around the world as a preeminent jazzman, decades of politics and trade embargoes between Cuba and the U.S. relegated the pianist to the status of relative unknown everywhere west of Miami. It wasn't until he won his second Grammy last year, as part of Texas trumpeter Roy Hargrove's all-star Afro-Cuban band Crisol and their superb 1997 Verve release, Habana, that Valdés got some of his due. Making a tour stop in Austin that year at the State Theater on Congress, Crisol's show was never better than each time Valdés took one of his explosive solos.

"Roy and I met when I invited him to play a festival in Havana," explains Valdés. "I had all his albums, and I liked them very much. He's a very young horn player, but very talented. So I spoke with his manager Larry Clothier and invited them to Cuba. There, we put some percussion to Roy's band, and I played piano. We decided that [Miguel] "Anga" [Diaz], as he had done with Dizzy and Chano Poso, should play congas, which he did. And it was marvelous. We spent two years working together, '96-'97."

The following year, 1998, Blue Note Records capitalized on the growing media awareness of Valdés by releasing his solo debut, Bele Bele en la Habana. It, too, was marvelous, landing at or near the #1 spot on virtually every jazz critic's year-end Top Ten poll. A work of astonishing ability -- jaw-dropping virtuosity and infinite ideas -- Bele Bele en la Habana brought together the three transcontinental muses of Valdés, but this time in singular fashion. Rather than sharing solo space with 10-12 members of the continually revolving-door Irakere, on Bele Bele, Valdés employed only a backing rhythm trio (bass, drums, congas), serving up Cuba's native son, mambo, danzón, descarga, guaracha, guajira, and guaguancó styles with nothing less than dazzling technique and boundless energy. Imagine John Coltrane as a pianist.

"Everybody liked it," he agrees. "I think because it's different. It's Latin jazz, but another kind of Latin jazz. It's a Latin jazz that's a lot more Cuban. Con más sabor. And it has elements of jazz, yes, but it's an album that's more Cuban -- Cuban jazz."

Given the success of the Buena Vista Social Club, a group of Cuban balladeers and musicians conjuring the Latin America of the Twenties and Thirties with the help of Ry Cooder, as well as subsequent spin-offs from Ruben Gonzalez, Compay Segundo, Ibrahim Ferrer, and Eliades Ochoa -- not to mention other label endeavors such as Rykodisc's ¡Cubanismo! series -- market awareness of Cuban music is at an all-time high. World music, in general, has finally blipped on the radar screens of many American consumers.

Did native Cubans like the album as much as Americans?

"They thought the record was marvelous, si," confirms Valdés. "Marvelous. It also brought back a style of music that wasn't being heard anymore. Which is pure Cuban son style. It's the purest form of Cuban music. All those guys are great. The best. In their era, the best. I've known and worked with them for years."

When it's pointed out that his bolero-ization of "Embraceable You" and the danzón/cha-cha version of "Rhapsody in Blue" might take some listeners by surprise, Valdés laughs.

"Yes, because it's inside a Cuban rhythm."

You can do this to/with any musical number?

Some people are just born that way.