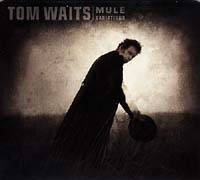 On the cover of Mule Variations, Tom Waits' first album since 1993's Black Rider and his first non-soundtrack release since 1992's Bone Machine, the singer looks over the shoulder of his battered overcoat and into the camera. He's not afraid of the camera stealing his soul because stealing souls is his profession -- avocation even. His songs are excruciatingly etched portraits, his albums more like books illustrated with these portraits than recordings. Not everything in his quarter-century oeuvre will hold up, but most of his efforts will tell compelling tales, and the brilliant and arcane Mule Variations will most likely be the last chapter for this century, a fin de siècle offering from the god of jukebox heartbreak and whiskey bottle wisdom. On Mule Variations, Waits lets his knife-sharp lyrics slice open the subjects, writing about the meat, the blood, and the muscle of life instead of just its dirty flesh and grimy underbelly as with the visceral opener, "Big in Japan." Waits loves to say that wife and co-songwriter Kathleen Brennan calls his music "grim reapers and grand weepers," and Mule Variations exemplifies it 16 times over. Hellhounds are never far from Waits ("Lowside of the Road," "Cold Water") and the exquisitely fresh pain of his love songs abound ("Georgia Lee," "Hold On," "Picture in a Frame," "Take It With Me"). Still, Waits is at his eccentric best with songs that sound disarmingly improvised like urban field hollers ("Get Behind the Mule"), adult jump rope rhymes ("Eyeball Kid"), and bluesy hoots ("Filipino Box Spring Hog"), all juicy testimony to his ripe genius. My Tom Waits-loving ex-husband once proposed that no new music be recorded for five years so we could catch up. For artists like Waits, music is best when it's aged and appreciated, like a vintage year for wine. Drink up.