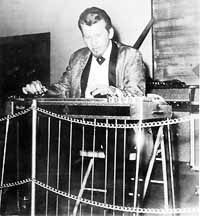 If the death of Austin blues guitarist T.D. Bell on January 9 was a hard blow for the Central Texas music scene, the loss of steel guitar player Jimmy Day must be measured in even larger terms -- its impact resonates on a national, even worldwide scale. Buda resident Day died of cancer Friday, January 22 at the age of 65.

There are a select few musicians whose talent is so highly regarded that their names literally become synonymous with their instrument -- Jimi Hendrix on the guitar, John Coltrane and Charlie Parker on the saxophone, Miles Davis on the trumpet. In the world of steel guitar, those names were Buddy Emmons and Jimmy Day.

Of course, Jimmy Day never received the fame of those other names -- he was primarily a sideman, rather than a band leader -- but like all sidemen, he helped make the sounds that made the stars famous. Day's résumé alone is mind-boggling; name a country music hall of famer from the Fifties or Sixties, any one, and chances are, he played with them. And there's a reason he hooked up with so many great musicians -- they sought him out.

But Day also played with some smaller names as well, which must be seen as a measure of their talent. When you're the guy who laid down the opening licks of Ray Price's "Crazy Arms," you don't have to play with also-rans. Clay Blaker, Alvin Crow, and Don Walser are among the Central Texas regional talents who received the Jimmy Day stamp of approval and benefited from his talents.

Day was born in Tuscaloosa, Alabama, on January 9, 1934, and grew up in Louisiana. He heard Shot Jackson playing the steel guitar in 1948 and fell in love with the instrument, developing a friendship with Jackson (Day, Jackson, and Emmons together manufactured their own brand of pedal steel, the Sho-Bud, beginning in 1957). He quickly mastered the instrument and was soon among heady company; the same year he graduated from high school, 1951, Day auditioned for The Louisiana Hayride, the Shreveport radio show which at the time rivaled the Grand Ole Opry in importance, and backed Webb Pierce and Red Sovine. That same year, he recorded with Pierce on "Don't Do It Darlin'," which went to number one.

From there, there are just too many highlights to mention. Day moved among the upper echelons of country royalty until the late Seventies, when Nashville began its attempts to destroy country music, often dropping the steel guitar from recordings altogether. Day returned to Central Texas in 1978 and sought out audiences who still appreciated true country. Among his gigs were the now-legendary Monday nights with Don Walser's Pure Texas Band at Henry's Bar & Grill. He moved to Nashville in 1991 for some session work when Nashville rediscovered the steel, but then settled down in Buda again shortly thereafter.