Tweet
print
write a letter
Where were you while all the Big Names were cavorting around town last week? Perhaps you were one of many who fought the crowds to see them in person, either at the Austin City Limits re-taping for Lucinda Williams or the big KGSR concert featuring Williams, Bruce Hornsby, Patti Griffin, Lyle Lovett, and others. Amazingly, though we here at the Chronicle assumed everybody knew Lovett would be the special guest at the latter, you folks seemed genuinely stunned at the Tall-Haired Man's appearance. Though this column doesn't afford the room to discuss in detail every faux pas, flap, and fistfight that peppered the weekend, here's a few notable notes: Guest appearances weren't limited to the KGSR show, where in addition to the already all-star lineup, Charlie Sexton and his guitar made quite a showing with Williams; Lovett's sets at the Paramount produced Robert Earl Keen and Ray Benson on Tuesday, Steve Fromholz on Wednesday, and the expected Willis Alan Ramsey and unexpected Eric Taylor on Thursday. In addition to the talent onstage, there was plenty in the audience, with director John Sayles, producer Maggie Renzi, documentary producer Paul Steckler,and cinematographer Lee Daniel, among others, in attendance for both Lovett and Williams. In fact, Sayles and Renzi were later spotted having lunch with Lovett and then dinner with Williams, who also had documentary filmmaker Ellen Spiro at her table. After Williams' ACL taping on Saturday, that whole crowd ended up at the Dog & Duck where they ran into Rick Linklater, The Cruise's Speed Levitch, and Bennett Miller. I expect the scene at the Waterloo Brewing Company this Saturday, 7pm, where KGSR is having a free release party for their Broadcasts Vol. 6, to be a little less Dancing About Movies, but you never know who Michael Fracasso, Cotton Mather, Kacy Crowley, Jon Dee Graham, and the Derailers (in that order) count among their friends and admirers.

Fast Balls From Behind 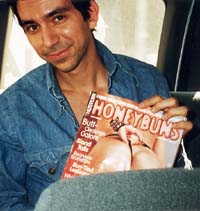 Much of Davíd Garza's charm has always stemmed from his perceived naïveté, but I think this may be going a little too far. Amateur photographer Andy Langer shot this picture of Garza aboard the local musician's van in the process of creating this week's cover story on Fastball (Garza's band opened for the lads on the tour), and it took "very little coaxing" to get the grinning Garza to hold up this gleaming slab of pornography, according to Langer. To save Garza's soon-to-be-married butt from any backlash, I should go ahead and sacrifice his guitarist Jacob Schulze, the actual owner of this fine periodical. While we're on the subject, you may note that the cover of this particular issue of Honeybuns features several phrases on the cover that would make fine band names. If your group is stumped for a title, why not try one of these: "Butt Cleavage Galore," "Blond Tails," "Bun-tied Lesbians," or my personal favorite, "Rear-view Brunettes" -- although that may be just a little too similar to Hootie & The Blowfish's Cracked Rear View.

Add Dumptruck to the list of now-defunct bands (again). Guitarist Alan Durham says, "I quit first and the rest of the band followed," adding that his departure was simply a matter of it being time to move on. Dumptruck founder Seth Tiven, on the other hand, says he's not really sure who's staying and who's leaving the band at this point. The group has an album in the can, which Tiven says is due for a February release on San Fransisco label Devil in the Woods, so he hopes to have a band at that time to support the album's release. "I'm not trying to minimize Al's contribution to the band and to the album," he stresses, "but he wants to get back to writing songs and being more than a guitarist for a band, and there's been a lot of versions of Dumptruck so far, and there'll probably be another version." From his job at MusicMakers, Durham jokes that Kathy Zeigler (of the recently disbanded Morningwood) was just in the shop and that the two are talking about working together, just because they're both responsible for breaking up so many bands. Oh, and while I'm at it, I should mention that premier Latin act La Mafia has also announced its end, with plans calling for a final album to be recorded in December and January. A handful of dates the band had committed to following the recording of their new album will be their last.

Welcome to the Club

The beginning of the end for Liberty Lunch seems to have finally arrived; the city did indeed vote last Thursday to proceed with negotiations with CSC (Computer Software Corp) towards building where the Lunch now stands. CSC, in turn, announced on Tuesday that they had voted to negotiate with the city. The corporation has announced that they are hoping to work toward a goal of late summer 1999 for getting their new offices into operation, making the Lunch's days numbered indeed. See our "Politics" section for in-depth analysis of this juggernaut and how it will further affect your life and downtown's entertainment areas.

Because clubs never close without new ones popping up, it should be pointed out that this weekend marks the grand opening of the Purgatory Lounge, rising from the ashes of the Blue Flame/Flamingo. Couple Ken Riley and Katheryn Kinslow are behind the project and they say the new club will continue in the tradition of its predecessors with Ignorance Park, Commies,and Slum City playing this Friday, and the Chumps, Putdowns, and a reunion of the Reclusives this Saturday. The Lounge has already been open for a short while on a BYOB basis, but this week marks (hopefully) the approval of the venue's beer license; despite his experience working with Miss Laura at the old Blue Flamingo, Riley gasps that he "had no idea how much red tape was involved" in getting the abovementioned license. A little farther on down the road, look for Austin Blues to make a New Year's Eve debut on Sixth Street with Popa Chubby ringing in 1999 and the club itself.

Elmer Akins, the man credited as the longest-running radio host in America, died Saturday, December 5 at the age of 87. As the voice of KVET's "Gospel Train," the Austin native devoted his life to music, active as a promoter of gospel events as well as being honored at the Texas Gospel Train show at Bass Concert Hall last year. Talk about the end of an era...

I hear that's Davíd Garza's drummer Mike Hale pushing Drew Barrymore around (on a hospital gurney) in the ads for the cherubic star's latest movie, Home Fries. Apparently, Hale was just an extra in the flick, which was lensed in the area, but he ended up being an extra special one...

Which do you hate more, Christmas or cassettes? If it's a tough call, you can rejoice in the fact that the 1996 tape-only Generation X-Mas compilation has been rereleased on CD this year, with five new tracks, and is finally available. I say finally because the CD's label, Monkey Boy, reports that the manufacturer who was supposed to press the discs objected to them on "moral grounds," and didn't bother to tell the label this until the CDs were already due to be shipped! Enjoy the 17 tracks full of holiday spirits (hic!) from the likes of Gut, Fuckemos, Brown Whornet, Pocket FishRmen, El Kabong, Voltage, and the Scabs. The Fuckemos' Can Kill You CD from Man's Ruin should already be in stores as well, so look for it as Frank Kozik's dedication to the band's complete library continues...

Another act to add to your list of Texas bands dropped by major labels: Tripping Daisy is no longer with Island, which is hardly a surprise considering that by the time they followed up their moderately successful I Am an Elastic Firecracker, featuring the hit "I Got a Girl," their entire genre was basically dead...

I hate to be a bummer, but insiders tell me not to expect any miracles at the Roky Erickson show tonight (Thursday) at the Continental Club. Go and enjoy the all-star Mystic Knights of the Sea and hope for the best, however; a little Roky is better than none, and it's possible you may hear some extra Erickson on the club's sound system, as advance copies of his upcoming Trance/Emperor Jones CD are expected to come in by then...

Remember Dejadisc? If you're still keeping score on these things, note that the label's former owner Steve Wilkison has recently taken the job of manager of New York-based label Koch Records; his first project was the recent reissue of Lucinda Williams' Rough Trade debut. Word has it, by the way, that Williams is negotiating with Koch for her own imprint on the label...

The Rev. William B. Miller has announced his resignation as Rector of the musician-friendly St. James Episcopal Church, site of Jazz at St. James and other music-related worship services. This Sunday's services at St. James will be his last...

Look for the Tom T. Hall tribute album touted at SXSW '97 to finally appear on store shelves this week. Don't look for the Watermelon imprint, however; Sire Records has gone ahead and issued the much-delayed album, titled Real, on their own...

Ginger Leigh and Sarah Dashew have released the duo CD Do What You Will and have a release party at the Spot next Thursday. After that, they're off to play a festival in New Zealand...

One of the Satan's Cheerleadershad her car broken into over the weekend at the Holy 8-Ball Studio and all her Satan's gear, specifically and only, was stolen. Hmmm. We also received a letter to the editor this week concerning a similar wearables-only theft, and I can't help thinking there's a renegade clothes-horse on the loose in our fair city. In any case, if you see an out-of-place pep squad running around town, call the cops...