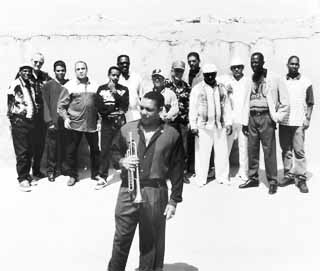 Several years ago, Rykodisc/Hannibal founder Joe Boyd met Sierra Maestra's star trumpeter Jesus Alemany in London. Because Boyd had long been disgusted with U.S. policy towards Alemany's homeland, Cuba, naturally the discussion turned to the trade embargo, which at that time was still keeping the island's highly developed and sophisticated folk, pop, and jazz from American consumers. It was during this meeting that ¡Cubanismo! was born.

At Boyd's insistence, Alemany put together a Cuban big band comprised of some of Cuba's biggest names in jazz, which the American producer then traveled to Havana to record. The resulting CD, 1996's ¡Cubanismo!, received such enthusiastic reception that the band not only continued to exist, it released a second album the following year, Malembe, and just this past month, a third CD, Reencarnacion. In fact, such was the demand for the group, not to mention the impact the recordings had on the genre of jazz in general, that the group set out on the road following Malembe and has continued as demand has grown, perhaps exceeding even Boyd's hopes.

A major factor in the success of ¡Cubanismo! has been Alemany's enthusiasm, industriousness, and spiritual as well as musical contributions, which the trumpeter puts down to being from the island off the Florida coast.

"Our culture is very strong," says Alemany, "especially the music. You can see the influence of Cuban music in jazz, funky soul music, even rock & roll. It's a cultural phenomenon and nobody can deny it. You can't blockade the music."

Saying that ¡Cubanismo! and the reverberations it sent out throughout the music industry are the realization of his dreams as well as Boyd's, Alemany is only too happy to act as a pied piper of sorts when it comes to Cuban music.

"I have a sound that's been in my head since I was a child," explains the trumpet player. "I balance what's happening on the street with the rhythmic, harmonic, and melodic strength of our Cuban cultural identity."

Central to Alemany's music is that it retain its Afro-Cuban identity, which Boyd says it has, crediting ¡Cubanismo! with "forging a modern Cuban music which never leaves the clave or loses sight of the great dance rhythms that have influenced the world since 'El Manisero' ('The Peanut Vendor') became a worldwide hit in 1931."

Alemany certainly believes in providing music for dancing, and spoke rather sadly about jazz's evolution away from a dance music. On Reencarnacion, ¡Cubanismo! employs the range of exotic island styles, including pilon, mambo, guajira, guaracha, son, son montuno, and chagui. Alemany's interest in African cultural characteristics informs much of the music made by ¡Cubanismo! and preserved in Cuba.

It fairly goes without saying that Alemany has a point when he speaks of a Cuban influence on jazz, but jazz has marked Cuban music even more strongly, partly through the efforts of Mario Bauza, a great Cuban composer-arranger who played in the trumpet section of Cab Calloway's bands (where he sat next to and exchanged ideas with Dizzy Gillespie), Chick Webb, and Don Redman in the Thirties, then applied what he'd learned as music director of bandleader Machito's great Afro-Cuban outfit, with whom Charlie Parker and Gillespie performed.

Indeed, when I spoke to Alemany, he referred to Freddie Hubbard as "one of my favorites," along with Miles Davis and Lee Morgan. Cuban music has its own trumpet playing tradition, so Alemany's work is rooted in the work of Felix Chappottin, Chocolate Armenteros, "El Negro" Vivar, and Lazaro Herrero. Alemany is a very powerful player with a big tone, who articulates precisely and cleanly and is far more tasteful than the celebrated Arturo Sandoval.

In general, the personnel of ¡Cubanismo! is impressive, and includes such outstanding artists as flutist Orlando Valle, bassist Carlos Del Puerto, percussionist Tata Guines, and vocalist Polo Martinez. The band's performances crackle with excitement and judging from reviews and word of mouth, they're consistent, giving it all they have night after night. Check 'em out. It's not every day an all-star band from Cuba lands in the heart of Texas. You'll find the experience exhilarating.