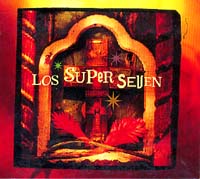 Freddy Fender, Flaco Jimenez, David Hidalgo, Cesar Rosas, Rick Trevino, Ruben Ramos, and Joe Ely: The real Latin Playboys. Unlike that Los Lobos side project, however, Los Super Seven aren't avant-garde, but rather the other end of the spectrum: traditional. More in line with that little ol' band from East L.A.'s back-to-roots album, La Pistola y el Corazón (1988). Taking Mexican folk treasures, songs so ingrained in south of the border consciousness that arrangements by Tejano music legends like Valerio Longoria and Lydia Mendoza are merely points of reference, Los Super Seven let the bajo sexto, accordion, guitarrón, jarana, and violin tell their familiar stories: "El Canoero" ("The Canoeist"), "La Sirena" ("The Mermaid"), "La Morena" ("The Dark Girl"), y "La Madrugada" ("The Dawn"). And their voices: Lobos Cesar Rosas' guttural growl and partner David Hidalgo's angelic tenor; Freddy Fender's high, pinched whine; Ruben Ramos' raw rasp. Nothing but tradition going back generation upon generation upon generation. And yet on "La Morena," when Ramos' ageless, timeless cry mixes in with the delicious mariachi mulch of the instrumentation -- augmented mostly by Max Baca's bajo sexto, Joel Guzman's accordion, and Mariachi group Campanos de Americas' backing -- there's the same disorienting time-warp effect the Latin Playboys filter their music through. Is it from the 21st century or two hundred years ago? Is it low-fi, one mike, or is it 24-track? Is it sacred or sinful? At its best, Los Super Seven is both -- all -- particularly when Ramos, Rosas, Hidalgo, or Fender take the vocals by the horns. Rick Trevino's Nashville-goes-Tejano tunes are respectful if slightly stiff, and what Joe Ely is doing here, covering Woody Guthrie's "Plane Wreck at Los Gatos" is anybody's guess, but to say they interrupt the fiesta would be overstating things; they're surrounded by such rollicking fun, Ely almost doesn't stand out like the sole white boy at a 24-hour Riverside tacqueria. Which is what a project, born out of a South by Southwest jam at Austin's La Manitas mexican restaurant (and recorded at Cedar Creek studios), should be: a feast for the senses as well as the soul.