Taking a P in the Snow

Tweet
print
write a letter
Sorry to inform you, but the contest for best holiday vacation this year has already been won -- by the members of that wild and wooly supergroup P, who just returned from a pair of gigs in Vienna. The foursome (Johnny Depp, Gibby Haynes, Bill Carter, and Sal Jenco -- plus a couple of L.A. session guys) were flown to Austria for a big reunion gig at a fashion show held in a swanky 1800s ballroom. The audience was more than appreciative, according to Carter; "They said it was the biggest event ever in Vienna, that it was historical -- actually, it was hysterical." It didn't hurt to have the in-demand Depp on bass chores, of course, and Carter notes that "many, many beautiful Viennese women" were conspicuous in their attendance. Along for the ride was record mogul and pal of the band Rick Rubin, who recorded the gig for posterity (be nice to Gibby and maybe he'll play it for you on his car stereo), and in the audience was Roman Polanski, whose new stage musical version of The Fearless Vampire Killers was checked out later by the band. Carter says the guys had so much fun they stayed on and played a club date before leaving Austria for London, where they got together with director/ex-Monty Python animator Terry Gilliam to check out a rough cut of his long-awaited new film version of Fear and Loathing in Las Vegas starring Depp as Dr. Hunter S. Thompson. Major bummer: The group ended up not getting to spend time in the Alps as they had planned, so they're going to have to return later. That means more gigs, but Carter expects most of them to be in Europe. Still, he says, "I'd like to play a couple of shows here in Austin," which is more feasible since P now has a stage show together and wouldn't have to meet
for endless reheasals.

It's been a notable two weeks for cartoonist/directors taking their turns on the stage. Of course you noticed Beavis and Butt-head Do America director Mike Judge at Antone's reprising his on-again, off-again role as bass player for Doyle Bramhall. And last week we covered Robert Rodriguez playing with Tito & Tarantula at Stubb's performing "Angry Cockroaches" from his film From Dusk Till Dawn. The return of Quentin Tarantino this weekend, of course, served to increase the list of celeb sightings tenfold. The Tito show at the Continental on Sunday proved to be the (hardly secret) hangout spot following Saturday's screening of Jackie Brown, where Tarantino, Rodriguez, Judge, and Rick Linklater had been on hand. The above -- minus Judge -- were spotted at Sunday's show, along with Ray Benson and Cindy Cashdollar of Asleep at the Wheel, Mojo Nixon, Sarah Brown, Rodriguez's wife, producer Elizabeth Avellán, band manager Mark Proct, Wammo (sans pig), and "The AK-47 Girl." Too bad Tito didn't know a lounge version of "Stuck in the Middle With You" -- QT coulda joined in wearing his Elvis outfit from The Golden Girls!

Look for the Ranch Studios in Capital Plaza to be the next large venue in town for touring shows. So far, the Ranch has been mostly used for corporate events and as a soundstage for various film and television events (Hope Floats, for example), but Guiltless Gourmet owner Doug Foreman says he's found that scheduling and reserving large blocks of time for film projects tends to be "squirrely" and that he would like to open the 12,000-square-foot space to promoters for more live music events. One local promoter says he's got a Fly alternative rock bill 99% confirmed for March 1 at the Ranch, calling it "a big black square room that's got all we could possibly need," but asked that the Chronicle not name the acts until the final 1% comes together. Rumors have been floating around that Foreman was looking for a promoter to deal with on an exclusive basis, but he denies this vehemently. "We're putting the word out: We're welcoming any [promoters who are] interested in contacting us," he says, adding that he would be interested in offering someone an exclusive -- if they can manage to fill the venue every single night!

Joe Ely has just about finished up work on his next album for MCA Records, a little number going under the name of Twisting in the Wind. No, that title doesn't mean Ely is hopping on the lounge music bandwagon (and thank god for that, right, boys and girls?). In fact, publicist Lance Cowan offers up the good news that around the Ely camp, Twisting is being called "a rocking sequel to Letter to Laredo." In fact, every description of the album that's going around, be it from Ely himself or band members, includes healthy use of the word "rocking" (or, more frequently, "rockin'"). The label says that the album will land on U.K. shelves in March as planned, but the U.S. release has been pushed back to May. When informed of this by the Chronicle, Cowan remained unfazed, saying that Ely's original rush to get the album out by March was simply so it would be ready for his European tour. Oh, and to be fair to Cowan, the label didn't know the name of the album, and he did.

And We Shall Be Six(teen) For Ever and Ever

"They're prolific, they're happy, and we are damn proud to have them on our label," says Warner Bros. publicist Rick Gershon of Sixteen Deluxe, who have recorded so many songs the label likes that their first promotional EP, Easy With the Sideways, contains more non-album bonus tracks (three) than advance numbers from Emits Showers of Sparks (two). There's already talk of another exclusive track going to Pop Culture Press for a free flexi, and Gershon says the band has already written a great deal of material for their next album. For now, though, the band has three Texas dates set for January (including a big one at Liberty Lunch on the 23rd) before being sent off in February to, as Gershon puts it, "tour the world for the rest of their known lives."

Again With the Ringing In and Out Thing

When Hamell on Trial comes to town for his New Year's gig at the Electric Lounge, he won't just be playing for the crowd there. Not only is the Austin Music Network pointing cameras at him and the Damnations for a live airing, Lounge co-owner (still) and video guy Mark Shuman will be shooting an electronic press kit (EPK, as they're called in the biz) for Hamell while he's down here, with plans to expand it into a long-form commercial video later. As I write this, Hamell is in L.A. playing 2,000-seat halls opening for G. Love & Special Sauce on tour. Another New Year's Eve broadcast will be Breedlove's Steamboat gig, which will be going out over the Internet. From this show on, all of the club's shows will be transmitted live over the Web. Check the club's home page (http://www.steamboat1874.com) for further info. And finally, not everybody is necessarily happy about this New Year. You can count Joe Ely, Lou Ann Barton, and Ian Moore among those who had their December 31 gigs fall through for one reason or another (And, hey, now that I think about it, why didn't Hamell ask me to open for him?)

Velvet Hammer are hoping to make you aware of Ira Einhorn, who was tried in absentia in 1993 in Philadelphia and found guilty of murdering Holly Maddux, sister of their friend, Mary Maddux. Recently he was discovered in France, but a French court decided to let him go instead of extraditing him to the U.S. The band suggests you call the matter to the attention of your senator...

El Kabong are having the CD release for their new Blue Light Special CD at the Black Cat on New Year's Eve...

Thighmaster are gearing up for some recording, and as such, have changed their name to "Thaimaster" to avoid getting any angry letters from Suzanne Somers...

Do great drummers all think alike? Terry Bozzio's improvisational album with Tony Levin and Steve Stevens opens with the same strange sample that King Coffey used for "Playground Twist" on the last Drain album. Creepy! Currently, Bozzio is in the studio mixing a new solo project, which may be available later at selected local stores...


Looking for a perfect Christmas gift for Michael Corcoran? How about a new heading for his Saturday gossip column in the American Statesman? After all, the one he has looks a lot like the one that the Chronicle's Andy Langer has been using on his webpage for over a year (as proof, check out http://www.bigjam.com/langer and you'll see that he hasn't even updated the
damn thing in almost that long). Maybe Corky could try a nice sweater sort of thing, with his smiling face encircled by a big cheery wreath? Bah... 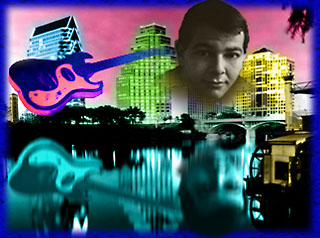 The Subgenius Church, that fine sacreligion, has chosen January 3 at Bob Popular's (the only club in town to share a name with their leader, J.R. "Bob" Dobbs) to herald the last six months of life on earth as we know it. Ivan Stang and others will rant and in addition to the $5 cover, Satan's Cheerleaders will be on hand to deliver "soul checks" at the door for $1. So save your soul now, while it's still worth something...