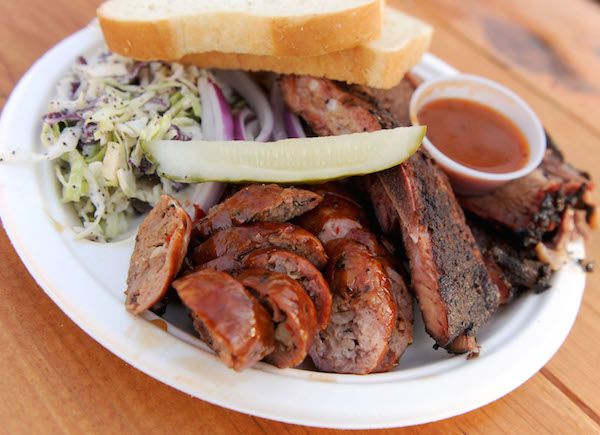 Tom Mickle­thwait's vintage 1960 Comet food trailer has a smoker on the back that produces terrific brisket, as well as moist chicken, baby back ribs, and pork loin. We want the sweet-spicy-garlicky sauce by the gallon, and while we're at it, we'll take as much mayo-mustard potato salad and sweet and sour slaw as we can fit in the car. Did we mention the housemade sausage?
Expand Map
Collapse Map

Hard to pronounce, sublime to eat

Located in the former Lewis' BBQ, Ed's has begun its own tradition with pork roast, ribs (and tips), chicken, brisket, and all your favorite sides.

You'd better circle the wagons early if you want to snag some of Aaron Franklin's famous brisket. After an auspicious start as a trailer, this brick-and-mortar location is serving what's regularly called the best barbecue in Texas, if not the country. The Franklins are devoted to producing the best-tasting barbecue they possibly can, and they won’t sacrifice that quality to feed more customers. Best to get in line by 9:30am.