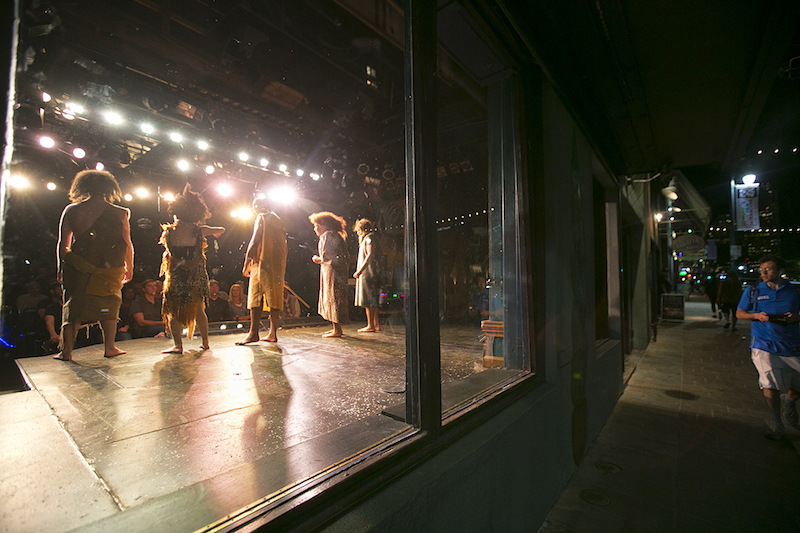 Back in the disco days of 1977, East Sixth Street was mostly a quiet home to winos and shuttered turn-of-the-last-century business facades that made for cheap rentals. In a tale as old as opportunity, some scrappy artists set up shop and began creating. Esther’s Follies has been producing its socially satirical, modern vaudeville show ever since and become a cornerstone of today’s thronging “Dirty Sixth” experience. The 290-seat house incorporates the show on the sidewalk outside the theatre into the act through the giant window on the back wall of the stage. Skits heavy on political parody, jaunty musical send-ups, and awe-inspiring magic courtesy of Ray Anderson come together in this Austin entertainment institution.
Expand Map
Collapse Map

Esther's Follies – Austin's not-so-secret weapon in the fight against ennui – the comedy gem that still dazzles this growing urban hub – returns to the weekly live and in-person stage of their club on Dirty Sixth, the whole troupe bringing back old favorites and debuting a new program of hilarity with topical, ripped-from-the-headlines sketches and musical numbers. And you do need a laugh or two, right about this time, don't you, citizen? (And how about a margarita to go with that?) We'd add that the mind-boggling illusions presented by magician Ray Anderson are a bonus in the night's clever spectacle ... but, the way that arch maestro conjures mystery and delight, "bonus" would be an insult. Thu., 8pm; Fri.-Sat., 8 & 10pm. $30-40.