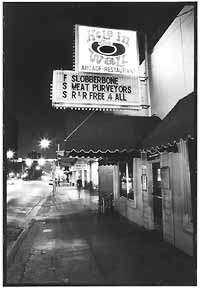 One of Austin’s oldest venues, the Hole in the Wall opened in 1974 and enjoyed an early run as a folkie hangout, serving as a favorite stage for Townes Van Zandt, Nanci Griffith, and Blaze Foley. The campus-area staple later became a breeding ground for punk, cosmic country, and alternative, launching the careers of Timbuk3, Fastball, Spoon, and Shakey Graves. Forty years on, the historic two-stage dive, with a collective capacity of a couple hundred, still features live music every night and serves as an important proving ground for new bands. Always a shoestring effort, the Hole briefly shuttered in 2002 and came dangerously close to being priced out in 2015.
Expand Map
Collapse Map

Enjoy the reliably delicious meat or veggie burgers and great seasoned fries with any of the reasonably priced beers on tap.

Cafe and lounge located on the north side of the lower lobby in the AT&T Hotel and Conference Center on the University of Texas campus.

With 28 beers on tap and more than 60 by the bottle, you'll need the burgers and nachos to stay upright.