e-edition
ON THE COVER:
Best of Austin: Restaurants 2022
WE HAVE AN ISSUE:
Toasts All Around

Plus APD at City Council, and what’s one man’s trash ...

Election Ticker: They Ban, We Plan

Animals, Society, and Race at Huston-Tillotson

When lifesaving medicines are against someone’s religion

APD Protects and Serves Itself With Eighth Street Report

Jones keeps lying in court and getting caught

Some thoughts on the inaugural Best of Austin: Restaurants Awards

We've all got our favorites

Crow Bar’s Gone In Flames, Good Work Austin Calls In the S.I. Votes, Pizza Is Pretty Much Rampant Everywhere, Festival Season’s Coming for Us All, and This Is Fine

Dinner parties, farmer's markets, beer, wine, and more for the week of September 22, 2022 Voxtrot: The (Re)start of Something

12 years after disbanding, the forerunners of modern indie-pop call on the "mystical, inexplicable force" that flowed through their Early Music

Review: The Bearer's Chained to a Tree (Silent Pendulum)

Review: No One at the Circus – The Story of Ghostwriter Through Place and Song

In one-man band's situationally annotated lyric book, the path is the goal

Fantastic Fest Cuts Into the Scarier Side of Cinema

How Art the Clown Became a Horror Icon

Slasher epic Terrifier 2 breaks all the rules, but director Damien Leone is just telling the story he wants to tell

The Film Family That Slays Together Makes Child's Play Together

Moseying Out Into the Multiverse With the Quantum Cowboys

Maltese midlife crisis comedy is a pleasant if undemanding jaunt

A serial killer targets film critics in this Bollywood thriller

Even Florence Pugh can't save this heavy-handed thriller
arts & culture

We Have an Issue: Toasts All Around

Opinion: Wildflower Center Fails Its Conservation Mission by Lighting Up Its Landscape

The Luv Doc is not trying to fetish shame

The Verde Report: What You Need to Know About the MLS Cup Playoffs in Austin 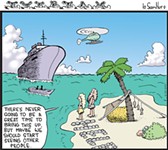