pdf
ON THE COVER:
Vaccine or Ventilator? You Decide
WE HAVE AN ISSUE:
Do Your Part. Get Vaccinated. Do It Now. 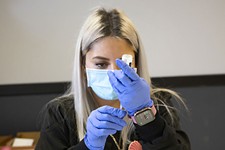 Vaccine or Ventilator? You Decide

Will the beat go on? (Outside? Behind a mask?)

José Garza and Delia Garza didn't get elected by accident. The cops' own lies show us why.

Council Recap: A Big Step Forward in St. John, but Much Work Remains

Know Your Rights! The City Can Help

Local chapter forms in support of the Protecting the Right to Organize Act, a renewal of workers' rights 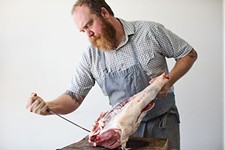 Jesse Griffiths wants you to #EatAHogSaveTheWorld

Dinner parties, farmer's markets, beer, wine, and more for the week of August 5, 2021 On the Move All Her Life, UK Songwriter Jade Bird Finds Her Speed in Austin

"Austin feels quite grounded and down-to-earth, which just sort of mimics the English mentality"

Faster Than Sound: Alexalone, All Together John and the Hole

Psychodrama from the bottom of a very literal pit of despair Moving In the Ether With ARCOS Dance Company

Local dance troupe explores the interzone of real and virtual

"Black Is Beautiful: The Photography of Kwame Brathwaite" at the Blanton Museum of Art 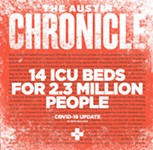 We Have an Issue: Do Your Part. Get Vaccinated. Do It Now.

Where to find the COVID vaccine in Austin

The Luv Doc: The Co Code

Let's pray there's a giant, flaming asteroid hurtling toward earth that will put an end to this nonsense The Verde Report: A Well-Timed Burst of Fresh Talent