pdf
ON THE COVER:
In a Thankless Year, 20 Austinites We're Thankful for in 2020
WE HAVE AN ISSUE:
Giving Thanks

In a Thankless Year, 20 Austinites We're Thankful for in 2020

We single out some locals who have given us hope

Dr. Mark Escott Has Been the Friendly Face of the City's Response to COVID-19

The Daily Texan Staff Balanced School, Journalism, and a Pandemic Even as white nationalism sticks around, kicking Trump to the curb is a Thanksgiving miracle

Public Notice: More to Be Thankful For

An overdue (if tentative) win in Southwest Austin

County Drops Most Charges Against Protesters

Nix on the Flix, Farm to Market Shutters, Sazan Hires a Hammond, Taste of Texas Extended

Dinner parties, farmers' markets, beer, wine, and more for the week of November 26, 2020 An Excerpt From Omar Dykes: The Life & Times of a Poor and Almost Famous Bluesman

Hard truths about the music business by Kent “Omar” Dykes and spouse Issa Medrano as they revisit Glory Days (for Bruce Springsteen).

Live music venues have asked for dedicated COVID-19 relief since March, but the city says applications won't open until next year.

Toward the Skylin3s with Liam O'Donnell

How the alien invasion franchise took the fight into space 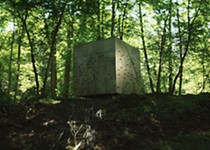 The extended festival takes a virtual look at Warsaw

More than laughs, more than addiction: a charming, tragic portrait of the Blues Brothers star

The Croods: A New Age

Bowie before he became Ziggy in this less-than-glittering docudrama

Imagine if all that money spent on Black Friday went to purchase art. It could happen: Artists Sunday is here! 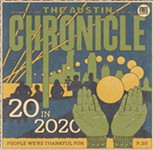 We Have an Issue: Giving Thanks

In this week’s issue, we celebrate 20 in 2020 working to make Austin a better, more equitable, more compassionate place

Mystery mounds of the Caddo