pdf
ON THE COVER:
The Gravity of Sound
news 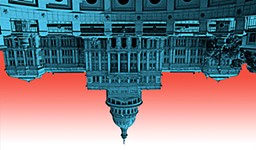 Texas Dems Set Their Eyes on the 2020 Prize

Their goal: Flip the state House of Representatives

Point Austin: The Stakes at 4700 Riverside

“Redevelopment” is always about community

Land Use Commissioners, public swing into action on the LDC

Council could take a first-reading vote in December

City Council Ready to Move on From Camping Ban

"Council made a decision, and it's time for us to move past the divisiveness in the community"

After Much Shouting, Riverside Deal Gets Done

County and operator at odds over expansion

Yet time is running out for Ruben Gutierrez, Rodney Reed

A Cookbook a Day Keeps the Munchies at Bay

The Gravity of Sound

The Krisha creator screens his latest at the Austin Film Festival

Documentary Cowboys Shows That Some Are Still Out on the Range

If you thought cross-country cattle drives were the stuff of legend, this Austin Film Festival showing will make you think again

Breaking up in the apocalypse at the Austin Film Festival

Pain, Pathos, and Prescience: The Work of Agnieszka Holland

Now Streaming in Austin: Attack of the Pod People!

The birth of the modern age in a battle of industrialists

The latest from The Witch director finds madness in isolation

Almodóvar's latest classic is a self-portrait by a great, aging artist

The Highs and Lows of Houston Life in Lot: Stories

Bryan Washington depicts residents with warmth and discernment as they live, fight, work, and love in a city that can be both a home and a challenge

Author Holly George-Warren shows the love in Janis: Her Life and Music

In Dad's Maybe Book, the author of Going After Cacciato is going after fatherhood

The Luv Doc: Fast and Furious

Tornadoes are a dime a dozen in Oklahoma 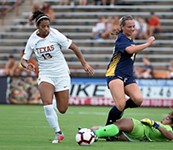