pdf
ON THE COVER:
The Drinks Issue
news The Roosevelt Room Stands Its Ground in a New Downtown

A Host of Historic Holdouts

Surrounded by the New Austin, these icons stuck around

Good news and bad news about your waste stream

The City:One Challenge "puts residents at the center of the mobility conversation"

Reps Outraged at "Inhumane" and "Dystopian" Conditions at Border

Advocates stand up for victims' rights

$406M ACC Budget Increases Pay Across the Board

No bartender? No problem.

BY MELANIE HAUPT AND JESSI CAPE

Good wine comes in cans, too

Four Flavors of Local Kombucha That Come in Cans

Chill with a can of Greenbelt Kombucha's fermented tea

Our 2019 Guide to Central Texas Breweries Faster Than Sound: Willie and a Movie

One in a Crowd: “Monica and Me”

Short film about being “the other woman” needs your crowdfunding support

Love – platonic and romantic – among the groceries

Home invasion shocker is best at its most sadistic

Drugs, guns, and violence on the streets of Hong Kong Uncorking the Story to the True Crime/Comedy Podcast Wine & Crime

In this new play by Terrence McNally, Diaghilev and Nijinsky seek revolution and godhood in the 20th century

In Stephanie Thoreson’s one-woman show, a gallery of awkward characters show us that it’s okay to be pathetic if you laugh about it later

Qmmunity: The Science of Queers

Plus events to make and celebrate queer history

Sometimes friends will let you down – sometimes in really big ways 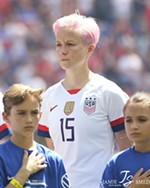