pdf
ON THE COVER:
At the Capitol, Texas Tries to Catch Up With Cannabis
news

At the Capitol, Texas Tries to Catch Up With Cannabis

From medical use to decriminalization to legalization, marijuana seems to have bipartisan support, so what's taking so long?

Or how about you just call it cannabis?

Ever so slowly, City Hall learns to govern without consensus

Public Notice: What Happens Next?

Public process will be key to whether code rewrite succeeds

Federal Judge to Texas: No, You Can't Bar Government Contractors From Boycotting Israel

Private dorm had been accused of discriminatory behavior against queer resident

Is a New Austin Land Development Code Done Yet?

Council: Stick a pin in that!

The Growing State of Downtown

Who’s Running for What in Texas So Far

Quick Skim of What's on the Ballot Outside Austin

SB 4 would essentially gut the House version of the bill

Gun Advocate Wants Apology From Texas Speaker of the House

What Time Is It in Texas?

Celebrate Community and Connection in Austin During Ramadan

Dinner parties, farmers' markets, beer, wine, and more for the week of May 2, 2019
music

Rancho Alegre Fights to Be the Cadillac of Conjunto Festivals

Faster Than Sound: A Festival Blooms in the Desert

Amid concern over a new C3 festival, homegrown Marfa Myths strives to grow with the Texas city

New Documentary Shows the Beauty of the Border, and the Perils of a Barrier

The River and the Wall captures a wilderness without divisions

Inside the 2019 Cine Las Americas Schedule

Get groovy on wheels by crowdfunding this horror short

Is going Full-On Quaid a thing? Maybe so, as the veteran goes bugnuts melodrama in the "crazy neighbor" thriller

Kenyan LGBTQ drama is a miracle solely for existing, yet also a vibrant, colorful romance

Conceptual artist brings "Hi, how are you, Gonzo?" to the Contemporary Austin

ScriptWorks' Out of Ink 2019: Artificially Intelligent

Springdale Road is increasingly strung with gems, and this is the newest one
columns

Imitation is also the most sincere form of ridicule 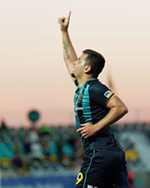 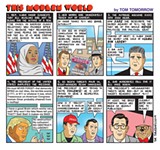