pdf
ON THE COVER:
How Austin's Queer Community Supports Its Own
news

Breathing Room for the City Budget

"Efficiency audit" petition campaign could use an independent audit

The commission was right. CodeNEXT must die. But then what?

Quote of the Week: Delia Garza

D2 council member talks about a balance with police

Council: Back in Action

Susana Almanza's back in D3, and Ann Kitchen has an opponent

Pick Your Plan for McKalla Place

Precourt vs. the field

County on Pace to Set Record for In-Custody Deaths

Arthur David Westley is sixth to die in custody this year

Fallout from a canceled rewrite

AISD: Respect for All Who Can Pay

More Trouble for Medical Board and SOAH

Why Are Some of Austin's Smartest Restaurants Heading Toward Dripping Springs?

The Switch, Pieous, and the League look west

Home Slice Pizza's New Location as Great as the Original 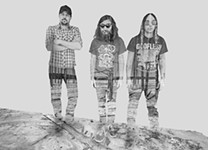 Hawkwind and Sabbath didn't spawn the Austin trio, but they should have

Heart-on-sleeve song siren paid her dues, all right – right down to the staples

In the Shadows (Again)
screens Fear the Walking Dead Casts Its Shadow Over Austin

The AMC spin-off smash brings the dead to Texas

The Way of the Iron Dragon

Spike Lee's wild true-life story would be a better documentary

Back to the Hundred Acre Wood in this live-action sequel

YA novel adaptation gently lampoons "pray the gay away" thinking

How Austin's Queer Community Supports Its Own

Spotlighting the LGBTQ people and orgs looking after our health, youth, elders, and art

Elizabeth Doss' adaptation of García Lorca's unfinished play is less a drama than a dream, unbound by logic, reason, or convention

This Pride keep the spark alive

An affirmation of already existing opinions