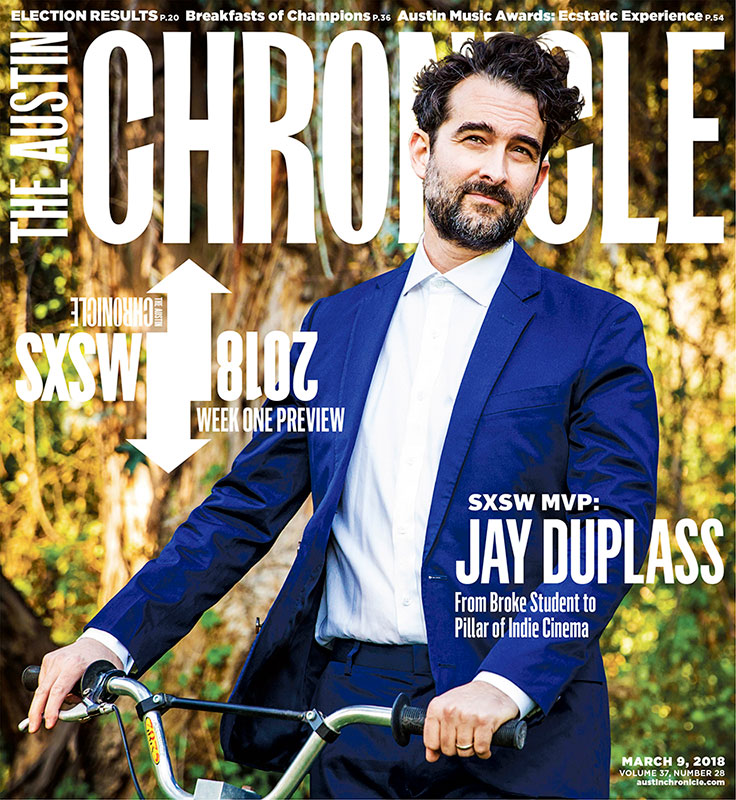 e-edition   |   pdf
ON THE COVER:
Jay Duplass Stars in Outside In at SXSW Film
features

Free Events for the Cash-Strapped at SXSW

Festival films, music, and more, on the cheap Tracking back on a wild election night

Waking up wondering if Texas will ever be purple

Quote of the Week: Bruce Elfant

Contract Talk: What About EMS?

Another rideshare bites the dust

Many balls in play for the Columbus Crew

Something Rotten at EMS

A surprising turn of events

The People’s Plan to Curb Displacement

The most dangerous policing job? Not so.

The Four Pillars of Austin Food During SXSW

We get by with tacos, pizza, barbecue, and burgers

Who says you can't have ice cream and french fries for breakfast?

Virginia B. Wood Dies at 67

Austin food community mourns the loss of one of its champions

After backing all kinds of rap/R&B/soul luminaries, Kydd Jones is putting his own sound on the front burner

Singer-songwriter had a calling

Singer-wongwriter Michael Winningham on the story behind his genre-fusion debut, Ryou Cannon

Playback: Next Big Buzzes at SXSW 2018

SXSW regulars discuss what the festival means to them

Jay Duplass Stars in Outside In at SXSW Film

Homegrown filmmaker on mumblecore, friends, and his first South By break

Austin's own on her films, Don't Leave Home, Cleansed, and "Maude"

New archival footage of the king, the musician, and the man behind the music

SXSW Short “Come & Take It” and the Story Behind #CocksNotGlocks

Hold to Your Best Self is a high school Rashomon

A different spirit of Christmas in Dallas filmmaker's 1985

Learning to listen with They Live Here, Now

A Fresh Look at Gentrification in SXSW Feature Blindspotting

The Greatest Meets the Brainiest in SXSW Doc Ali & Cavett

Tracy Morgan on Almost Dying, The Last O.G., and Being Barbershop Famous

SNL star goes back to the gentrified hood at SXSW

When the going gets weird, the weird turn pro

Where the man ends and the mask begins in Being Frank

Tommy Avallone investigates the phenomenon in The Bill Murray Stories

The Horror, the Horror

The darkest side of sxsw

Not just another Cabin in the Woods

SXSW Midnighters Go Into the Woods With The Ranger

Team Hurricane Is an Arthouse Anthem for Teenage Girls at SXSW

Love is sickness, not the cure in this anti-rom-com

Is Virtual Reality Heading to Its Next Great Leap Forward?

Virtual Reality Offers a World Without Rules for Filmmakers

The first rule of VR storytelling is that there are none

The Brewer's Table Is Not Your Average Brewpub

Laser-Focused SXSW Panels on Making Progress in the Food World

Altering the future, one bite at a time

How Do You Pet a CryptoKitty?

Female industry professionals on power in parity, equality in cinema at SXSW Interactive

Robert Rodriguez Goes Back to His Roots for New Reality Series

Locals at SXSW, plus RSVP for a Maybe Shower

The zombie apocalypse is over. So now what?

Bruce Willis picks up where Charles Bronson left off.

It's a soggy hold up!

Based on a Francine Prose novel, Submission stars Stanley Tucci as a liberal arts professor who becomes dangerously close to a student.

A Wrinkle in Time

It’s not just about twisting balloons into dog shapes, you know

Idle hands are the Devil's playthings