Readers Poll at a Glance

Quote of the Week: Elizabeth Colvin

Open enrollment for the ACA runs through Dec. 15

Outgoing Travis County Democratic Party chair would be a longshot

Millions of children could lose their health care, thanks to Congress

Union hobbled after talks break down on Monday

Who Wants to Take on Ken Casaday?

No physical evidence implicates Cardenas in his cousin's murder

The Austin Polish Film Festival delves into the country's complicated past

If you ever dreamed of being Jane Goodall, Chronicle Controller Liz Franklin invites you to take a stroll through PBS' uncanny valley of robotic animal spies

The raunchy moms are back with some Christmas spirit(s)

The remarkable life of a blind card mechanic

The dark side of Fifties middle America

A woman confronts an older ex-lover with devastating results

Lovers of the literary, you’re needed at the Capitol for this year’s TBF, stat!

Dinner at the Center of the Earth

This journalist’s accounts of ordinary people seeking to create good in Africa is challenging, frightening, and powerful

In this staging of Tarell Alvin McCraney's drama, struggles with brotherhood and blackness play out against Yoruban ritual

Lots of worthy FUNdraisers this week

The Luv Doc: Buttering Your Muffin

Never discount the sexual voraciousness of a pimply-faced teenager

Front license plate – do I even need it?

BY LUKE ELLIS AND CAROLINE YOUNG 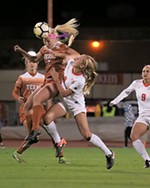