pdf
ON THE COVER:
Sounding the Alarm on Texas' Nursing Home System
news

25% of the state's 1,200 long-term care centers have been cited for serious standard deficiencies

BY NINA HERNANDEZ AND ANNAMARYA SCACCIA

We could handle another giant, but let's let 'em open their own wallets

Quote of the Week: Ann Denkler

CodeNEXT is starting to wear on everyone

Texas Is About to Get Its First Marijuana Dispensary

Agenda features the CURE and a list of proposed audits

“Center for Austin’s Future” in Search of Candidates

Hernandez to ICE Reversal Critics: “This Is Not Over”

Treatment for opioids seen as big step, but hardly only solution

Texas “must not become a sanctuary state for abortions,” says A.G.

Wages at issue for union after oversight concessions Finding the gold in an Allandale strip mall

Lattes are not the way to this caffeine junkie's heart

Places in town to eat something autumnal without pumpkin spice 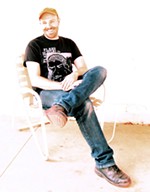 Underground turntable maestro needs no introduction to local DJs, but to the broader community he's flown under the radar

The Shape of Things to Come (Dark Entries)

AFF Brings Walter Hill for The Warriors and Then Some

Writer/director comes out to play

Dispatches from the couch

BY JOSH KUPECKI AND MARJORIE BAUMGARTEN

Mark Felt: The Man Who Brought Down the White House

Account of the informant who brought down Nixon's administration

Visceral dramatization of the heroic work of the Granite Mountain Hotshots

Same Kind of Different as Me

Can two men span the gap of cultural differences?

Take Every Wave: The Life of Laird Hamilton

Intimate portrait of the surfing legend only skims the surface.
arts & culture

Half Price Books: Where Rare Is Well Done

Does the rare books room at Austin’s North Lamar location owe its success to alchemy?

Zach Theatre's Singin' in the Rain

Choosing Bach’s top chamber works may be impossible, but the baroque ensemble made a convincing case for five not-easy pieces in this concert
columns

Public garden adds a culinary component to its flowering beds