Beggars, hustlers, and dealers make you wonder how Downtown music keeps from going under

Mayor Adler's dream of a compromise on housing supply

Public Notice: What Is the Sound of One Shoe Falling?

DNA Case Review Is On

The governor releases his draft budget

Council Wrap: State of the City

Rush to Judgment: CodeNEXT 1.0 out Now

Draft now out, it's time for some hot opinions

Lege Lines: Islamophobia Is out of Hand

In Texas and the nation, anti-refugee and anti-Muslim fervor grows

Constitutional Carry This Session? Not Likely.

The Hightower Report: Really and Truly, Who Needs Facts? 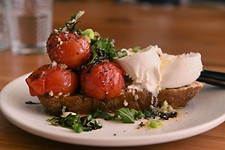 Austin classic remains one of the best dining bargains in town

Where to take out-of-towners to enjoy the warm weather We talk to the jazz titan about Coltrane, his latest album, and more

Playback: Shorter Hours Could Be Coming for Venues During SXSW

Another clubs ordinance change drops right before the Festival

Prick of the Litter

I Am Not Your Negro

A stunning doc on the civil rights era

The final(?) nail in this action horror franchise

Gripping drama from the director of A Separation

The Space Between Us

There is life on Mars
arts & culture 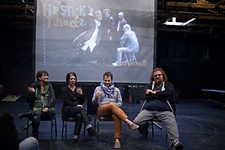 Austin Opera's The Daughter of the Regiment

Just as the young woman of the title is deemed "charming," so too is Donizetti's work in this company's staging

"Jim Roche: Some Americans Feel Like This" at Bale Creek Allen Gallery

The show's hand-stenciled, colorful re-creations of political signs are a timely vessel for America's honesty
columns The largest transgender survey ever conducted is out, and the results reflect many hardships

The Luv Doc: Hot for Teacher

It's not easy to steal your daughter's boyfriend

Need to talk to a good lawyer about your specific situation? Contact Austin Lawyer Referral Service.