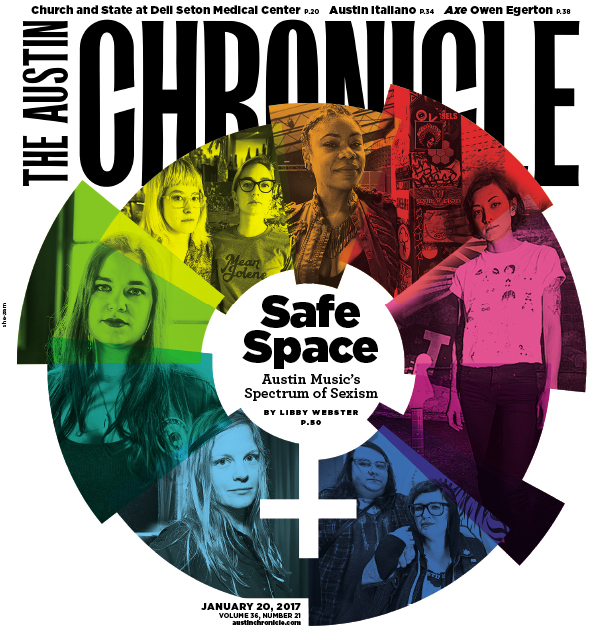 e-edition   |   pdf
ON THE COVER:
The Austin Music Scene's Spectrum of Sexism
news Do the hospital’s ties to the Catholic church and limits on women’s reproductive health care compromise Dell Med students' training?

This week's marches begin a long and difficult resistance

Public Notice: The FABPAC Reaches Out

"We can make the process more efficient and effective”

Planned Parenthood Fights Texas In Court to Save Medicaid

A Grant to End Youth Homelessness

HUD will provide $5.2 million to the city

More millennials commit suicide than any other age group

Bill of the Week: Immunization Choice for Children

Rep. Sarah Davis’ HB 97 would grant children the right to consent to their own immunization for cancer treatment

Texas' death chamber is only heating up

The Hightower Report: The New Founder

What is Gov. Greg Abbott trying to do to our Constitution? How a red sauce town boiled over

Get adventurous with your first meal of the day Owen Egerton Gets Spooked Writing The Axe Murders of Villisca

The Resurrection of Gavin Stone

A former actor finds faith in his hometown

A shady cop searches for his kidnapped son

Another twisted (and twisty) offering from M. Night Shyamalan

Matt & Ben at the Institution Theater

The Polish artist’s industrial-material sculptures at the Contemporary Austin capture the physicality of our society, the rigidity of our order
columns

The Luv Doc: Hold It