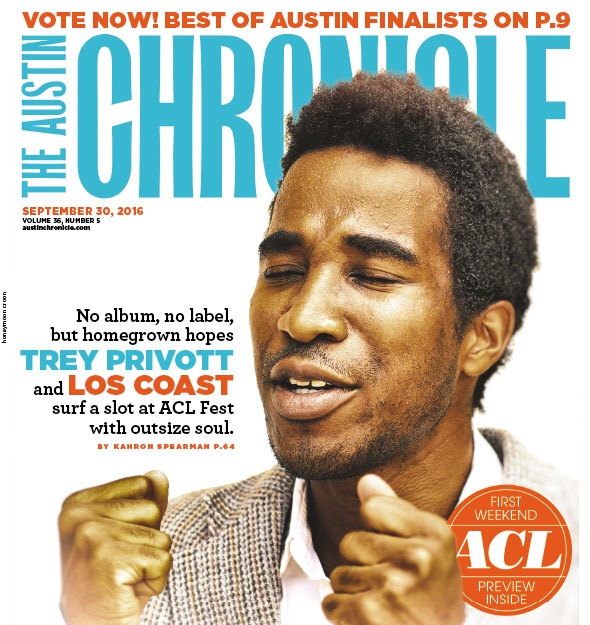 In a crazy political year, the choices for sane voters should be obvious

Plus various options for getting carried away

Local Democrats Take Another Shot at Education Board

Gallo goes solo on the Grove; don't be like Zim; and other election stories

Rep. Dawnna Dukes Will Step Down in January

Gondolas to the Rescue?

Jury's ruling will net detective $240,000 in back pay, pain and suffering

Where to Eat Near ACL Fest

The ABCs of ACL Eats

Snacking at the fest is elementary

The Take-Out: Responsibility in Food Writing

How to talk more respectfully about global cuisine

ACL Friday by the blurb, listicle, and gospel tent testifying

Painting of a Panic Attack (Atlantic)

Why Are You OK (Interscope)

We couldn't get Kendrick on the phone, so we replayed his greatest verse

Anything but Words (Warner Bros.)

Are You Serious (Loma Vista)

The first weekend of ACL Fest closes with highlights galore

Save some room for after Zilker Park!

BY JAMES RENOVITCH AND TUCKER WHATLEY

Singer Trey Privott on the band's origins and influences

The Star Wars Prequels Strike Back

Austin-made documentary gets to the heart of the hate

I Like to Watch: Joe Swanberg Takes It Easy

Mark Wahlberg stars in this throwback to Seventies disaster films

This astute Polish ghost movie is an instant genre classic

Kate Winslet stars in this adaptation of the Australian best-seller

Is That a Gun in Your Pocket?

The captain of India's World Cup-winning cricket team is profiled

Like a fairy in her YA novel The Radiant Road, Katherine Catmull keeps transforming the mundane into lovely art

"Elliott Erwitt: Home Around the World" at the Ransom Center

Page Two: Two Candidates in Search of a Presidency

And an electorate looking for comic book superheroes We all need a gaycation every now and then

The Luv Doc: A Success Story

You can't hold her hand all the way to the altar, and it would be a terrible idea if you did