pdf
ON THE COVER:
How the American Genre Film Archive Is Saving Movies One Reel at a Time
news

How the Co-op Works

Beside the Point: Failing Our Teachers

Why won't we fund our schools?

Public Notice: Out of the Frying Pan ...

Council: Don't Say I Told You So

Common goal is to prevent any added runoff into Shoal Creek

The Cost of Clearing the Rape Kit Backlog

Charges Against Prado Dropped, for Now

Driver in collision that killed Ofc. Abdul-Khaliq stays hung in the balance

Activists, lawmakers call on State Board of Education to reject racist Mexican-American textbook

Commissioners to vote on the health district's FY 2017 budget on Sept. 20

County Commissioner: A Question of Viability 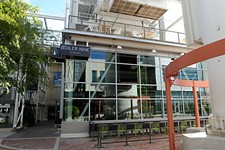 “When you heard Mike Bloomfield play, you got the sense this was the real shit."

I Hate I Skate

Scumbags of the Rodeo

I Like to Watch: Getting Faded With High Maintenance

HBO takes another hit of the popular Vimeo series

Stay out of the (noisy) woods

Third time's a charm, if a bit forgettable

Domestic dramedy has flashes of magic

A boy and his Air Jordans

Teen skaters get caught up in the drug world

A writer returns home to care for his sick mother

Southwest of Salem: The Story of the San Antonio Four

When the Bough Breaks This new musical take on the fall of Atlantis pulls us into an ancient place, powered by myth and ritual

This group show is messy and a little berserk, but that's what makes it important and kindles joy in us
columns

The Luv Doc: Beware the Righteous