pdf
ON THE COVER:
No Justice. No Peace.
news

No Justice. No Peace.

Picking up the pieces after a week of terror

What to Make of It

GOP Leadership at Odds Over Response to Tragedy

Public Notice: "We Are Orlando"

No arrests have been made in missing persons case

REV UP the Vote

A local campaign aims to boost the disability vote

Death Watch: A First Time for Everything

Why was the Brexit vote so shocking to global elites? 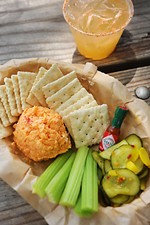 Every dog has its day at North Austin hot spot

What the Hell Is Mighty Swell?

A salad short of a picnic

Aaron Sinclair's band makeover into A. Sinclair rises to the occasion on Get Out of the City

Playback – AAN Convention: Worth the Ink?

Checking the pulse of print media and music journalism

Back From the Dead

Eat That Question: Frank Zappa in His Own Words

Doc doesn't quite capture the spirit of the brilliant iconoclast

Controversy aside, this reboot fails to hit the mark

Hunt for the Wilderpeople

At the end of a tragic week, the Marian Anderson String Quartet reached for grace and tendered it to us

This solo show's elegant, enigmatic watercolors evoke life across the universe from salt crystals to algae to galaxies

This exhibit is about being Mexican-American, but it will make things happen for you whatever your ethnicity
columns

Dip into this not-so-secret swimming hole, but save the cooking for the professionals

Nobody wants a fiery taint on their first date